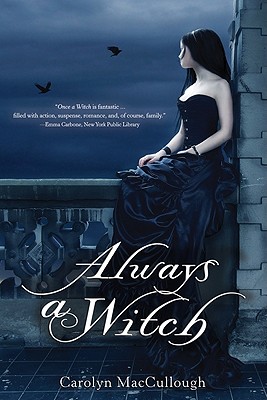 Since the gripping conclusion of Once a Witch, Tamsin Greene has been haunted by her grandmother’s prophecy that she will soon be forced to make a crucial decision—one so terrible that it could harm her family forever. When she discovers that her enemy, Alistair Knight, went back in time to Victorian-era New York in order to destroy her family, Tamsin is forced to follow him into the past. Stranded all alone in the nineteenth century, Tamsin soon finds herself disguised as a lady’s maid in the terrifying mansion of the evil Knight family, avoiding the watchful eye of the vicious matron, La Spider, and fending off the advances of Liam Knight. As time runs out, both families square off in a thrilling display of magic. And to her horror, Tamsin finally understands the nature of her fateful choice.

Carolyn MacCullough is the author of the young adult urban fantasy Once a Witch and three other YA novels. Born and raised in Connecticut, she has lived in Sicily, Scotland, and even the wilds of New Jersey before settling down in Brooklyn where she now lives with her husband and daughter. In addition to writing, she also teaches creative writing at NYU and The New School. Visit her website at www.carolynmaccullough.com.

Once A Witch
"A fantastic urban fantasy with an enchanting romance at its heart." --Cassandra Clare, New York Times bestselling author of City of Bones "Carolyn MacCullough casts a mesmerizing spell with Once a Witch. Family secrets and sibling rivalry, time-travel and magical 'Talents' all brew together to create a superlative--and supernatural--coming-of-age story. Add an epic battle of good versus evil and an enchanting first kiss and this bewitching novel commands a sequel." --Megan McCafferty, New York Times bestselling author of the Jessica Darling series

"A light urban fantasy that goes down easy and will have readers asking for its sequel." --Kirkus Reviews Drawing the Ocean
A New York Public Library Best Book for the Teen Age
"MacCullough has a gift for using language with spectacularly evocative phrasing." --VOYA
"MacCullough's subtle use of present tense and visually evocative writing create an eloquent portrait." --Kirkus Reviews
"Sadie's narrative voice is absolutely authentic, and the story of her quirky, endearing relationship with Ryan is memorably poignant." --ALA Booklist Stealing Henry
"MacCullough's dialogue is flawless. The journey is fascinating." --ALA Booklist, starred review
"Finely crafted." --Kirkus Reviews —