All Heart: My Dedication and Determination to Become One of Soccer's Best (Hardcover) 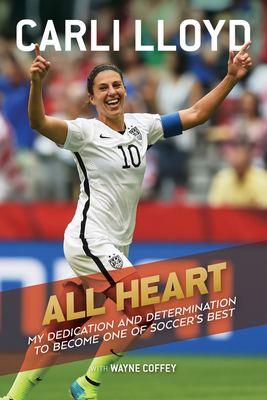 All Heart: My Dedication and Determination to Become One of Soccer's Best (Hardcover)


Special Order—Subject to Availability
In the summer of 2015, the U.S. women’s national soccer team won the World Cup behind an epic performance by Carli Lloyd. Carli, a midfielder, scored three goals in the first sixteen minutes—the greatest goal-scoring effort in the history of World Cup finals.

But there was a time when Carli almost quit soccer. She struggled with doubts and low confidence. In All Heart, adapted from When Nobody Was Watching specifically for younger readers, Carli tells the full inspiring story of her journey to the top of the soccer world—an honest, action-packed account that takes readers inside the mind of a hardworking athlete.

Includes two full-color photo inserts.
CARLI LLOYD is captain of the U.S. Women's National Soccer Team and has been named the FIFA World Player of the Year for two years in a row (2015 and 2016). The midfielder led the U.S. team to World Cup victory in 2015 and also scored the gold-medal winning goals in both the 2008 and 2012 Olympics. She has played in three FIFA Women's World Cup tournaments, helping the U.S. win bronze, silver and then gold. In 2015 she was also awarded the FIFA Golden Ball and the Silver Boot. The New Jersey native currently plays for Manchester City Women FC in England. Follow Carli at carlilloyd.com or on Twitter @CarliLloyd.


WAYNE COFFEY is an award-winning sports journalist and the author of more than thirty books, including such New York Times bestsellers as The Closer with Mariano Rivera; Wherever I Wind Up with R. A. Dickey; and Above the Line with Urban Meyer.

"While soccer fans will especially enjoy the detailed descriptions of key matches from her career, there’s much to glean about teamwork and determination for any teen. An inspiring story of perseverance." —Booklist   "Not for lovers of soccer only: readers after inspiration to keep playing, regardless of the odds, will find plenty here." —Kirkus   "...the central themes of hard work, diligence, ambition, and tenacity make Lloyd’s story an inspiration for all readers, especially tweens looking for strong role models." —School Library Journal —