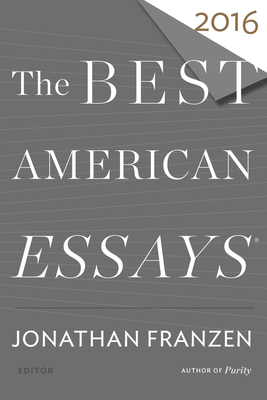 
Not On Our Shelves—Ships in 1-5 Days
A true essay is “something hazarded, not definitive, not authoritative; something ventured on the basis of the author’s personal experience and subjectivity,” writes guest editor Jonathan Franzen in his introduction. However, his main criterion for selecting The Best American Essays 2016 was, in a word, risk. Whether the risks involved championing an unpopular opinion, the possibility of ruining a professional career, or irrevocably offending family, for Franzen, “the writer has to be like the firefighter, whose job, while everyone else is fleeing the flames, is to run straight into them.”

JONATHAN FRANZEN, guest editor, is the author of five novels, most recently Purity, and five works of nonfiction and translation, including Farther Away and The Kraus Project. He is a member of the American Academy of Arts and Letters, the German Akademie der Künste, and the French Ordre des Arts et des Lettres.