Under The Udala Trees (Paperback) 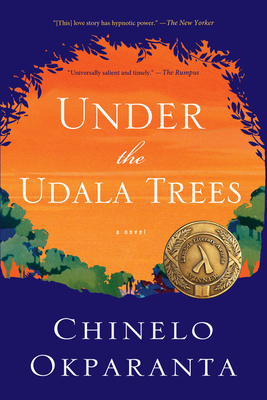 Under The Udala Trees (Paperback)


On Our Shelves Now at:
“If you’ve ever wondered if love can conquer all, read [this] stunning coming-of-age debut.” — Marie Claire

Ijeoma comes of age as her nation does. Born before independence, she is eleven when civil war breaks out in the young republic of Nigeria. Sent away to safety, she meets another displaced child and they, star-crossed, fall in love. They are from different ethnic communities. They are also both girls. But when their love is discovered, Ijeoma learns that she will have to hide this part of herself—and there is a cost to living inside a lie.

Inspired by Nigeria’s folktales and its war, Chinelo Okparanta shows us, in “graceful and precise” prose (New York Times Book Review), how the struggles and divisions of a nation are inscribed on the souls of its citizens. “Powerful and heartbreaking, Under the Udala Trees is a deeply moving commentary on identity, prejudice, and forbidden love” (BuzzFeed).

“An important and timely read, imbued with both political ferocity and mythic beauty.” — Bustle

“A real talent. [Under the Udala Trees is] the kind of book that should have come with a cold compress kit. It’s sad and sensual and full of heat.” — John Freeman, Electric Literature

“Demands not just to be read, but felt.” — Edwidge Danticat
CHINELO OKPARANTA was born and raised in Port Harcourt, Nigeria. Her debut short story collection, Happiness, Like Water, was nominated for the Nigerian Writers Award, long-listed for the Frank O’Connor International Short Story Award, and was a finalist for the New York Public Library Young Lions Fiction Award, as well as the Etisalat Prize for Literature. Her first novel, Under the Udala Trees, was nominated for numerous awards, including the Kirkus Prize and Center for Fiction First Novel Prize, and was a New York Times Book Review Editor’s Choice. She has published work in The New Yorker, Granta, Tin House, the Kenyon Review, AGNI, and other venues, and was named one of Granta’s Best of Young American Novelists. She received her MFA from the Iowa Writers’ Workshop, and she is currently Associate Professor of English and Creative Writing at Swarthmore College.

Winner of the Lambda Literary Award for Lesbian Fiction  Winner of the 2016 Jessie Redmon Fauset Book Awards—Fiction  Nominated for the NAACP Image Awards, "Outstanding Literary Work—Fiction"  Nominated for the Hurston/Wright Legacy Awards, Fiction  Short-listed for the 2017 International Dublin Literary Award  Finalist for the Ferro-Grumley Award for LGBT Fiction  Long-listed for the 2015 Center for Fiction First Novel Prize Long-listed for the 2016 Chautauqua Prize  Semifinalist for the VCU Cabell First Novelist Award A New York Times Book Review Editors' Choice One of NPR's "Best Books of 2015" One of Buzzfeed's "The 24 Best Fiction Books of 2015"  One of Bustle's "2015’s 25 Best Books, Fiction Edition"  Included on the Los Angeles Times's "Holiday Books Roundup" One of the Wall Street Journal's "15 Books to Read This Fall" One of Buzzfeed's "19 New Books You Need to Read This Fall" One of Bustle's "Best Books of September 2015" A Shelf Awareness "Best Book of 2015" One of the Sun Herald's "Ten noteworthy fiction and nonfiction titles on the way" One of Gawker's "9 Must-Reads" for Fall One of Publishers Lunch's "Favorite Books of 2015, From the News Editor" One of Buzzfeed UK's "27 Brilliant Books You Must Read This Winter"   "Incorporating Nigerian folktales, the author weaves a lush coming-of-age tale of forbidden love but also of strength and resilience... The vivid imagery of the bloody civil war and the stark Nigerian post-war landscape complements the sumptuous prose. This book has universal appeal."—Historical Novel Society  "Under the Udala Trees is a gripping story of love, faith, and turmoil in post–civil war Nigeria. When Ijeoma falls in love with another girl, she must come to terms with who she is in a society that refuses to accept her. A heartbreaking and moving account of Ijeoma’s coming-of-age, as well as the story of a country during a time of great disturbance, Under the Udala Trees will affect you deeply."—Buzzfeed, "The 24 Best Fiction Books of 2015"   "Ijeoma is a young girl growing up in the difficult years following Nigeria's 1967 Biafran War. But coming of age in a war-torn country isn't her only challenge: She's also struggling to balance her taboo same-sex relationship with her mother's (and her society's) expectations. Chinelo Okparanta's writing is so immersive that even readers who have nothing in common with Ijeoma will feel like they've lived her experience. I couldn't put the book down and even pulled an all-nighter to finish it (then was a zombie at work the next day). Plan your schedule around this binge read!"—NPR, "Our Guide To 2015’s Great Reads"   "At the height of the Biafran war, two Nigerian girls fall in love. The romance is brief, but for Ijeoma, the narrator of this début novel, it is the beginning of years of pain...The love story has hypnotic power...Details of disco-era Nigeria—jerricans filled with palm wine, a suitor in bell-bottom trousers—suggest Okparanta’s skill and promise."—The New Yorker, "Briefly Noted"   "One of the most talked about debuts this fall."—The Wall Street Journal, "15 Books to Read This Fall"   "[Okparanta] is a natural —