Older Than Dirt: A Wild but True History of Earth (Hardcover) 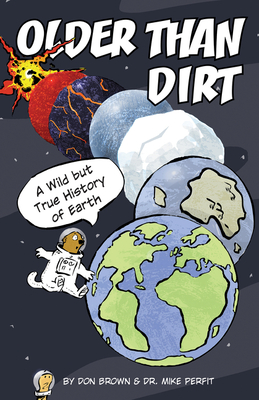 Older Than Dirt: A Wild but True History of Earth (Hardcover)


Not On Our Shelves—Ships in 1-5 Days
Almost 14.5 billion years ago, it all started with a BIG BANG and what began as a cloud of gas, dust, and rock eventually took shape and bloomed into a molten sphere. Battered by asteroid collisions, ice ages, and shifting tectonic plates, our fledgling planet finally pushed forth continents. But if you think the earth has calmed down since then—think again! Geological activity continues to sculpt the earth’s landscape, sometimes with terrible consequences for its inhabitants: earthquakes, volcanoes, and tsunamis.

In this one-of-a-kind, wild, but true history of Earth, the Sibert Honor medalist Don Brown takes on big concepts with humor and ease.

Don Brown is the YALSA excellence in nonfiction and Sibert Honor award-winning author and illustrator of many nonfiction graphic novels for teens and picture book biographies. He has been widely praised for his resonant storytelling and his delicate watercolor paintings that evoke the excitement, humor, pain, and joy of lives lived with passion. School Library Journal has called him "a current pacesetter who has put the finishing touches on the standards for storyographies." He lives in New York with his family.

“Older Than Dirt's playful nature and innovative approach make learning science a true joy.” —Shelf Awareness   "The groundhog and worm’s repartee results in a witty history of the planet that packs a remarkable amount of information into an engaging format."  —Publishers Weekly   "The groundhog is utterly endearing, and the worm is remarkably expressive considering the absence of limbs and most facial features. Readers will be entertained, informed, and inspired to learn more. . . A guaranteed hit with science lovers and a best bet for convincing skeptics that science is indeed a grand and exciting adventure." —Kirkus   ? "In one hundred fact-crammed but surprisingly zippy pages, nonfiction graphic novelist extraordinaire Brown covers fourteen billion years of Earth’s development. From the Big Bang to our planet’s origin to land mass formation to the appearance of life, Brown and scientific consultant Perfit provide an astonishingly comprehensive overview and manage to humanize it with witty asides from the woodchuck and worm who serve as surrogate teacher and student, as well as quick visits with important historical scientists." —Booklist, starred review   "...This is a worthy work of graphic nonfiction for earth science units." –School Library Journal   "The graphic format, light tone, and amusing repartee keep up the pace over the course of an impressive number of geology topics."--Horn Book  —