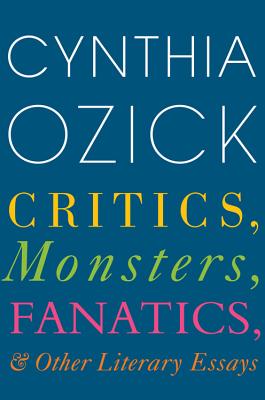 
Special Order—Subject to Availability
In a collection that includes new essays written explicitly for this volume, one of our sharpest and most influential critics confronts the past, present, and future of literary culture.

If every outlet for book criticism suddenly disappeared — if all we had were reviews that treated books like any other commodity — could the novel survive? In a gauntlet-throwing essay at the start of this brilliant assemblage, Cynthia Ozick stakes the claim that, just as surely as critics require a steady supply of new fiction, novelists need great critics to build a vibrant community on the foundation of literary history. For decades, Ozick herself has been one of our great critics, as these essays so clearly display. She offers models of critical analysis of writers from the mid-twentieth century to today, from Saul Bellow, Bernard Malamud, and Kafka, to William Gass and Martin Amis, all assembled in provocatively named groups: Fanatics, Monsters, Figures, and others. Uncompromising and brimming with insight, these essays are essential reading for anyone facing the future of literature in the digital age.
Author of numerous acclaimed works of fiction and nonfiction, CYNTHIA OZICK is a recipient of the National Book Critics Circle Award and was a finalist for the Pulitzer Prize, the National Book Award, and the Man Booker International Prize. Her writing has appeared in The New Republic, Harper's, and elsewhere. She lives in New York.
"“A sorceress of silken prose, wholly incapable of platitude, of cliché, of even the stray dead phrase, Ozick can make anything happen with a sentence.”—The New Republic

"A forceful and witty collection of literary criticism by a brilliant critic and novelist."—Shelf Awareness

"'Serious criticism is surely a form of literature,' she posits, and serious readers will agree and find it practiced here."—Publishers Weekly