The Beginning Of Spring (Paperback) 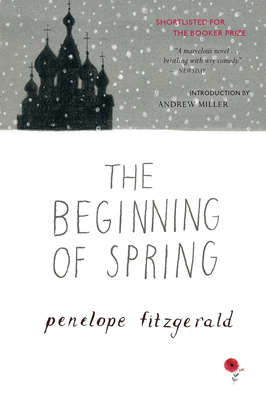 The Beginning Of Spring (Paperback)


On Our Shelves Now at:
Fitzgerald's novel of pre-revolutionary Moscow, shortlisted for the Booker Prize. Featuring an introduction by Andrew Miller.

“Fitzgerald was the author of several slim, perfect novels. The Blue Flower and The Beginning of Spring both had me abuzz for days the first time I read them. She was curiously perfect.”— Teju Cole, author of Open City

“Writing so precise and lilting it can make you shiver.” — Los Angeles Times

March 1913. Moscow is stirring herself to meet the beginning of spring. English painter Frank Reid returns from work one night to find that his wife has gone away; no one knows where or why, or whether she’ll ever come back. All Frank knows for sure is that he is now alone and must find someone to care for his three young children. Into Frank’s life comes Lisa Ivanovna, a quiet, calming beauty from the country, untroubled to the point of seeming simple. But is she? And why has Frank’s bookkeeper, Selwyn Crane, gone to such lengths to bring these two together?
PENELOPE FITZGERALD wrote many books small in size but enormous in popular and critical acclaim over the past two decades. Over 300,000 copies of her novels are in print, and profiles of her life appeared in both The New Yorker and The New York Times Magazine. In 1979, her novel Offshore won Britain's Booker Prize, and in 1998 she won the National Book Critics Circle Prize for The Blue Flower. Though Fitzgerald embarked on her literary career when she was in her 60's, her career was praised as "the best argument ... for a publishing debut made late in life" (New York Times Book Review). She told the New York Times Magazine, "In all that time, I could have written books and I didn’t. I think you can write at any time of your life." Dinitia Smith, in her New York Times Obituary of May 3, 2000, quoted Penelope Fitzgerald from 1998 as saying, "I have remained true to my deepest convictions, I mean to the courage of those who are born to be defeated, the weaknesses of the strong, and the tragedy of misunderstandings and missed opportunities, which I have done my best to treat as comedy, for otherwise how can we manage to bear it?"