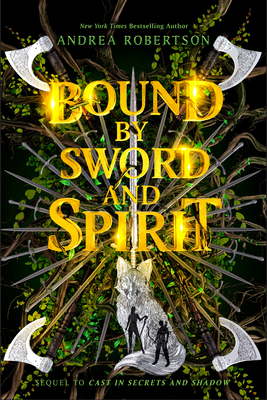 This is book number 3 in the Loresmith series.

Game of Thrones meets Shadow and Bone in the final book in this action-packed fantasy from Andrea Robertson, the internationally bestselling author of the Nightshade series.

Ara and her companions are separated, and the world is in danger. The evil Vokkans are continuing their conquest of Saetlund and the world Ara is meant to protect. The only thing that can stop the wizards and the destroyer, Vokk, is Ara and her Loreknights. But she still has many to find.

Teth is captured—thrown into prison with none other than their betrayer, Prince Eamon. While he struggles with a shocking secret from his past, he must determine whether he can trust his former friend to help turn the tables on the dark wizards. Meanwhile, Eamon has to gather all his courage and wit to enact a secret plan to help his sister and redeem himself—no matter what.

As a battle to save their world approaches, Ara and her friends must rally their forces—some more mysterious than they ever could have imagined—and take back their kingdom, once and for all. Ultimately, they will change the future of Saetlund forever.

From internationally bestselling author Andrea Roberston comes the final book in a gorgeously written new fantasy series perfect for readers of Leigh Bardugo's Shadow and Bone or Sabaa Tahir's An Ember in the Ashes series.
Andrea Roberston is the internationally bestselling author of the Nightshade series and of Invisibility, which she co-wrote with David Levithan. She is also the author of the Inventor's Secret trilogy and Forged in Fire and Stars. Originally from Minnesota, she now lives in California. She can be found online at andrearobertsonbooks.com.