For Better or Cursed (The Babysitters Coven #2) (Paperback) 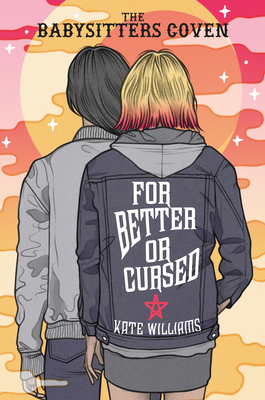 For Better or Cursed (The Babysitters Coven #2) (Paperback)

This is book number 2 in the The Babysitters Coven series.

Veronica Mars meets Buffy the Vampire Slayer in this clever, action-packed sequel to the Babysitters Coven about a coven of witchy babysitters who realize their calling to protect the innocent and save the world from an onslaught of evil.

Esme Pearl's life used to be all about bumming rides and babysitting. Sure, it wasn't glamorous, but it was predictable. All that changed when Cassandra Heaven came to town, and they discovered their complicated, and connected, legacy: Esme and Cassandra are Sitters, supernaturally gifted teens armed with an ever-changing grimoire of Sitter witchcraft to help them protect the innocent and keep evil demons at bay. You know, typical teenage stuff.

But just as Esme is starting to adjust to--and maybe even like--her new normal, life lobs another glitter bomb her way. The Synod--the Sitterhood's governing circle--has called a Summit, a once-in-a-generation gathering that promises training, education, and a lot of ice-breakers.

Esme should be excited--a Summit might mean she can finally get the answers she desperately wants--but she can't shake a building sense of panic. Especially since Cassandra's not acting like herself; Esme's dad is MIA; Pig is out of dog food; Janis is scared to be alone; and there's a guy who seems too good to be true, again. Worst of all, there's no one watching the kids. It's obvious the Summit is a haute mess, but will it be a deadly one, too?
Kate Williams has written for Seventeen, NYLON, Cosmopolitan, Bustle, Vans, Calvin Klein, Urban Outfitters, and many other brands and magazines. She is the author of the Babysitters Coven trilogy: The Babysitters Coven, For Better or Cursed, and Spells Like Teen Spirit. Kate lives in Kansas. To learn more about her and her books, go to heykatewilliams.com or follow @heykatewilliams on Twitter and Instagram.
Praise for The Babysitters Coven Series:

A New York Public Library Best Book of the Year

“Buffy-meets-Babysitters Club, this frothy fantasy-horror will draw readers purely on its premise…. Decidedly on-trend with its witchy focus and its nostalgic-for-the-’90s reboot vibe.” —Bulletin

"Baby-Sitters Club meets The Chilling Adventures of Sabrina in this delightful new young adult novel about two teenagers who discover that they're more than just babysitters." —Bustle

"For chill fun and fun chills, there’s no better place to start than here."—Paste Magazine