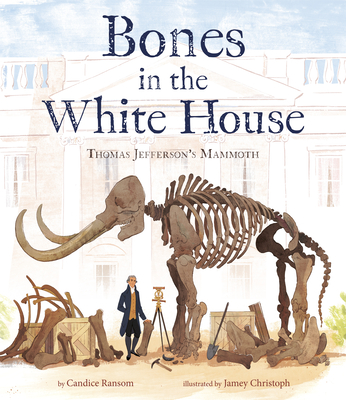 Thomas Jefferson: Third president of the United States. Author of the Declaration of Independence. Obsessive prehistoric mammal hunter?? It's true! In this little-known slice of American history, see Thomas Jefferson as never before!

In the late 1700's, America was a new nation, with a vast west that held age-old secrets: Bones! Massive tusks and enormous animal skeletons were being discovered and Thomas Jefferson - politician AND scientist - was captivated. What were these giant beasts? Did they still roam on American soil? Jefferson needed to find out. Funding explorers, including the famed Lewis and Clark, Jefferson sought to find a complete prehistoric mastodon skeleton - one which would advance the young science of paleontology, but would also put this upstart young country on the world stage. Follow along on the incredible journey - full of triumphs and disappointments, discoveries and shipwrecks, ridicule and victory.

Author Candice Ransom researched this amazing story for years before telling this tale, closely collaborating with Jefferson scholars and natural history experts. Jamey Christoph's moody, luminous illustrations paint the scene: A young country, a president with a thirst for knowledge, and an obsessive, years-long quest to find the prehistoric bones that would prove the importance of a growing nation.
CANDICE RANSOM only ever wanted to be a children's book writer. She is the author of over 125 books for kids and young adults, including Amanda Panda Quits Kindergarten and Amanda Panda and the Bigger, Better Birthday, and teaches in the children's literature program at Hollins University. Candice lives in Fredericksburg, Virginia, with her husband and her cats, Faulkner and Edison. Visit her at www.candiceransom.com.

JAMEY CHRISTOPH is the illustrator of several picture books, including Stonewall: A Building. An Uprising. A Revolution and Gordon Parks: How the Photographer Captured Black and White America. He has also created illustrations that have appeared in the New York Times and the San Francisco Chronicle and has received distinguished recognition from the Society of Illustrators. Jamey lives in Ohio with his partner and two dogs. See more of his work at jameychristoph.com and follow him on Instagram at @jameychristoph.