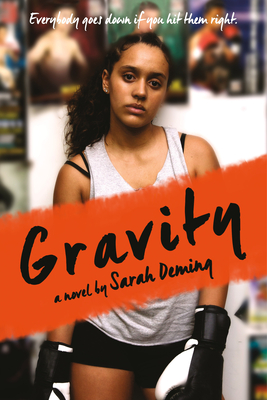 
Special Order—Subject to Availability
Rocky meets I'm Not Your Perfect Mexican Daughter in this YA novel about a young female boxer who learns to fight for what she wants.

Gravity "Doomsday" Delgado is good at breaking things. Maybe she learned it from her broken home.

But since she started boxing with a legendary coach at a gym in Brooklyn, Gravity is finding her talent for breaking things has an upside. Lately, she's been breaking records, breaking her competitors, and breaking down the walls inside her. Boxing is taking her places, and if she just stays focused, she knows she'll have a shot at the Olympics.

Life outside the ring is heating up, too. Suddenly she's flirting (and more) with a cute boxer at her gym--much to her coach's disapproval. Meanwhile, things at home with Gravity's mom are reaching a tipping point, and Gravity has to look out for her little brother, Ty. With Olympic dreams, Gravity will have to decide what is worth fighting for.
Sarah Deming is a New York City Golden Gloves champion and boxing journalist. She is also the recipient of a Pushcart Prize and a MacDowell Fellowship and has had her work published in the Washington Post, the New York Times, and the Threepenny Review and by HBO and CNBC. She lives in Brooklyn with her husband, Ethan, and coaches and mentors young boxers at NYC Cops & Kids--the real-life gym that inspired Gravity's story.
"Readers will immediately stand in Gravity's corner as she battles distractions and fights against the odds in pursuit of her dreams. A riveting pugilistic must-read." —Kirkus, starred review

“Boxing is the real romance here; as with any romance, the reading pleasure lies not in genre surprises but in the way the story brings freshness and joy to the familiar turns.”  —Bulletin