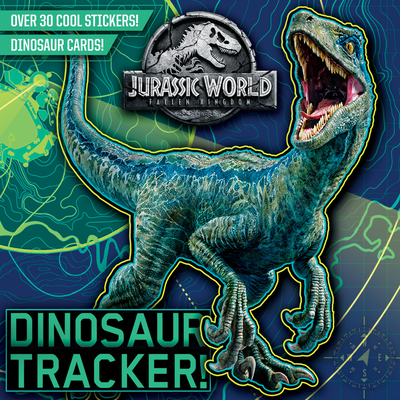 
Not On Our Shelves—Ships in 1-5 Days
Relive the excitement of the blockbuster film Jurassic World: Fallen Kingdom—which opens to US audiences on June 22, 2018—with this full-color storybook.

Universal Pictures and Amblin Entertainment's Jurassic World: Fallen Kingdom releases in theaters on June 22, 2018, bringing with it all the wonder, adventure, and thrills of one of the most popular and successful franchises in cinema history. This all-new motion picture event sees the return of favorite characters and dinosaurs including Blue, the Velociraptor; Tyrannosaurus rex; and Mosasaurus—along with new breeds more awe-inspiring and terrifying than ever before!

Boys and girls ages 3 to 7 will dig into this full-color storybook featuring the incredible dinosaurs from Jurassic World: Fallen Kingdom.

Jurassic World: Fallen Kingdom is being directed by J. A. Bayona (The Impossible, A Monster Calls), with Steven Spielberg and Colin Trevorrow serving as executive producers and Frank Marshall and Pat Crowley as producers.
Rachel Chlebowski is a writer living in New Jersey. When she isn’t writing picture books and coloring and activity books, Rachel edits children’s books in New York City. She also enjoys reading, crafting, and taking care of her pet fish.

Established in July 2013 in a merger between Penguin and Random House, Penguin Random House, with nearly 250 independent imprints and brands on five continents, more than 15,000 new titles published each year, and close to 800 million print, audio, and eBooks sold annually, is the world’s leading trade book publisher. Like its predecessor companies, Penguin Random House is committed to publishing adult and children’s fiction and nonfiction print editions and is a pioneer in digital publishing. Its publishing lists include more than 60 Nobel Prize laureates and hundreds of the world’s most widely read authors.