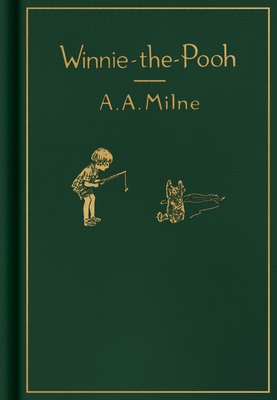 By A. A. Milne, Ernest H. Shepard (Illustrator)


Not On Our Shelves—Ships in 1-5 Days
The perfect gift for both new readers and passionate collectors!

A gorgeous new collectible edition of the beloved classic, Winnie-the-Pooh, crafted as a replica of the first American edition from 1926. This elegant book features a textured case, gold foil stamping, and illustrated endpapers.

For over ninety years, Winnie-the-Pooh and his friends—Piglet, Owl, Tigger, and the ever doleful Eeyore—have endured as the unforgettable creations of A.A. Milne, who wrote this book for his son, Christopher Robin, and Ernest H. Shepard, who lovingly gave Pooh and his companions shape through his illustrations.

Now fans can celebrate the legacy of Pooh with a beautiful new gift edition of the original stories as they were first published in the United States.
A. A. Milne was born in 1882 in London. He was a playwright and journalist as well as a poet and storyteller. His classic children's books were inspired by his son, Christopher Robin. Milne died in 1956.

Ernest H. Shepard was born in 1879 in England. His pictures of the Pooh characters are based on real toys owned by Christopher Robin Milne. Shepard died in 1976.