Brotopia: Breaking Up the Boys' Club of Silicon Valley (Paperback) 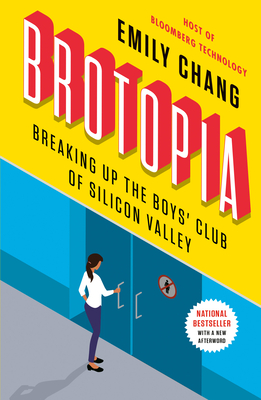 Brotopia: Breaking Up the Boys' Club of Silicon Valley (Paperback)

Silicon Valley is a modern utopia where anyone can change the world. Unless you're a woman.

It's time to break up the boys' club. Incisive, powerful, and a fierce rallying cry, Emily Chang shows us how to fix Silicon Valley’s toxic culture--to bring down Brotopia, once and for all.

Silicon Valley is not a fantasyland of unicorns, virtual reality rainbows, and 3D-printed lollipops for women in tech. Instead, it’s a "Brotopia," where men hold the cards and make the rules. While millions of dollars may seem to grow on trees in this land of innovation, tech’s aggressive, misogynistic, work-at-all costs culture has shut women out of the greatest wealth creation in the history of the world.

Brotopia reveals how Silicon Valley got so sexist despite its utopian ideals, why bro culture endures even as its companies claim the moral high ground, and how women are speaking out and fighting back. Drawing on her deep network of Silicon Valley insiders, Chang opens the boardroom doors of male-dominated venture capital firms like Kleiner Perkins, the subject of Ellen Pao's high-profile gender discrimination lawsuit, and Sequoia, where a partner once famously said they "won't lower their standards" just to hire women. Exposing the flawed logic in common excuses for why tech has long suffered the “pipeline” problem and invests in the delusion of meritocracy, Brotopia also shows how bias coded into AI, internet troll culture, and the reliance on pattern recognition harms not just women in tech but us all, and at unprecedented scale.
Emily Chang is the anchor and executive producer of Bloomberg Technology, a daily TV show focused on global technology and Bloomberg Studio 1.0, where she regularly speaks to top tech executives, investors, and entrepreneurs. She was previously a CNN correspondent based in Beijing and London, and has won five regional Emmy awards for her reporting. She is a graduate of Harvard University and lives in San Francisco with her husband and three children.
"[Chang] is clearly engaged with and often incensed by her subject, and the best parts of Brotopia are those moments when she actively resists the 'it's all good' ethos of the Bay Area and cuts down chauvinism with the disdain it deserves." —New York Times

"Brotopia goes far beyond the salacious to offer an important examination of why the technology industry is so dominated by men—and how women are pushing back." —Financial Times

"When reading Brotopia, it's easy to envision it as a film…. Women who have triumphed in tech despite the odds…could be the film's heroines, and so would the young girls learning how to code despite it all." —The Verge