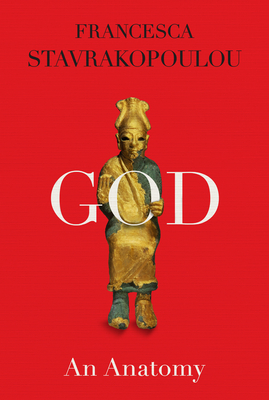 
In Stock—Click for Locations
An astonishing and revelatory history that re-presents God as he was originally envisioned by ancient worshippers—with a distinctly male body, and with superhuman powers, earthly passions, and a penchant for the fantastic and monstrous.

"[A] rollicking journey through every aspect of Yahweh’s body, from top to bottom (yes, that too) and from inside out ... Ms. Stavrakopoulou has almost too much fun.”—The Economist

The scholarship of theology and religion teaches us that the God of the Bible was without a body, only revealing himself in the Old Testament in words mysteriously uttered through his prophets, and in the New Testament in the body of Christ. The portrayal of God as corporeal and masculine is seen as merely metaphorical, figurative, or poetic. But, in this revelatory study, Francesca Stavrakopoulou presents a vividly corporeal image of God: a human-shaped deity who walks and talks and weeps and laughs, who eats, sleeps, feels, and breathes, and who is undeniably male.

Here is a portrait—arrived at through the author's close examination of and research into the Bible—of a god in ancient myths and rituals who was a product of a particular society, at a particular time, made in the image of the people who lived then, shaped by their own circumstances and experience of the world. From head to toe—and every part of the body in between—this is a god of stunning surprise and complexity, one we have never encountered before.
FRANCESCA STAVRAKOPOULOU is a professor of Hebrew Bible and ancient religion at the University of Exeter. A graduate of Oxford University, her focus is in the history of ancient Israel and Judah--she has also worked in television on the BBC and Channel 4, presenting shows on the historicity of the Bible and the Hebrew Bible, the role of women in biblical times and the development of the biblical text. She lives in Exeter, England.
"A detailed and scrupulously researched book . . . [Stavrakopoulou] proceeds, in 21 chapters packed with knowledge and insight, to 'anatomize' the divinity from head to toe, starting with the 'standing stones' that marked the footsteps of deities in the Late Bronze and Early Iron Age and ending with images of God that enabled people to imagine that they were somehow communing with him 'face to face.'"—Karen Armstrong, The New York Times

“Brilliant . . . Fascinating . . . Boldly simple in concept, God: An Anatomy is stunning in its execution. It is a tour de force, a triumph, and I write this as one who disagrees with Stavrakopoulou both on broad theoretical grounds and one who finds himself engaged with her in one narrow textual spat after another . . .  Great fun to read . . . A stunning book.”—Jack Miles, Catholic Herald

“This book is a great rebel shout. . . [A] rollicking journey through every aspect of Yahweh’s body, from top to bottom (yes, that too) and from inside out . . . Ms. Stavrakopoulou has almost too much fun.”—The Economist

“In both Judaism and Christianity God is conceived as non-physical. In God: An Anatomy Francesca Stavrakopoulou shows that this was not yet so in the Bible, where God appears in a much more corporeal form. This provocative work will surprise and may shock, but it brings to light aspects of the biblical account of God that modern readers seldom appreciate.”—John Barton, author of A History of the Bible

"Good Lord, Stavrakopoulou touches that sweet spot that is scholarly, funny, visceral and heavenly. A revelation."—Adam Rutherford, author of A Brief History of Everyone Who Ever Lived

"One of the most remarkable historians and communicators working today."—Dan Snow, author of On This Day in History

"In Stavrakopoulou's stunning dissection of historical religious texts, the real back-story and context of the God of Judaism and Christianity is revealed . . . Where pious theologians have abstracted him into emptiness, Stavrakopolou gives him back his substance, and he’s so much more interesting in this bodily form! Both scholarly and accessible, and full of fascinating stories - I guarantee you’ll never think of this God the same way again."—Alice Roberts, author of Ancestors

"God: An Anatomy is a tour de force . . . Extraordinarily rich and nuanced . . . Stavrakopoulou has taken to heart the biblical injunction to seek the face of God, and what emerges is a deity more terrifyingly alive, more damaged, more compelling, more complex than we have encountered before. More human, you might say.”—New Humanist

“This is an extraordinary book. It’ll rewire your thinking, and it’s so readable you won’t notice till it’s too late.”—Tim Whitmarsh, author of Battling the Gods

“Well-researched . . . A refreshing look at ancient Scripture and the people behind it, reminding readers that the concept of ‘God’ in the 21st century is a world away from that of the earliest people of Israel. A challenging, engaging work of scholarship that sheds new light on ancient Hebrew conceptions of the divine.” —Kirkus Reviews