Last Call at the Hotel Imperial: The Reporters Who Took On a World at War (Hardcover) 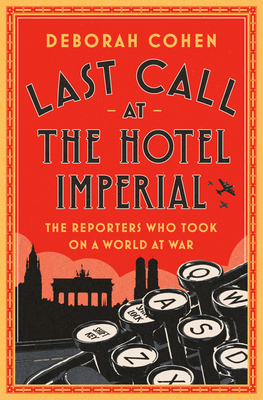 Last Call at the Hotel Imperial: The Reporters Who Took On a World at War (Hardcover)


On Our Shelves Now at:
NEW YORK TIMES EDITORS’ CHOICE • A prize-winning historian’s “effervescent” (The New Yorker) account of a close-knit band of wildly famous American reporters who, in the run-up to World War II, took on dictators and rewrote the rules of modern journalism

ONE OF THE BEST BOOKS OF THE YEAR: The New Yorker, NPR, BookPage

They were an astonishing group: glamorous, gutsy, and irreverent to the bone. As cub reporters in the 1920s, they roamed across a war-ravaged world, sometimes perched atop mules on wooden saddles, sometimes gliding through countries in the splendor of a first-class sleeper car. While empires collapsed and fledgling democracies faltered, they chased deposed empresses, international financiers, and Balkan gun-runners, and then knocked back doubles late into the night.

Last Call at the Hotel Imperial is the extraordinary story of John Gunther, H. R. Knickerbocker, Vincent Sheean, and Dorothy Thompson. In those tumultuous years, they landed exclusive interviews with Hitler and Mussolini, Nehru and Gandhi, and helped shape what Americans knew about the world. Alongside these backstage glimpses into the halls of power, they left another equally incredible set of records. Living in the heady afterglow of Freud, they subjected themselves to frank, critical scrutiny and argued about love, war, sex, death, and everything in between.

Plunged into successive global crises, Gunther, Knickerbocker, Sheean, and Thompson could no longer separate themselves from the turmoil that surrounded them. To tell that story, they broke long-standing taboos. From their circle came not just the first modern account of illness in Gunther’s Death Be Not Proud—a memoir about his son’s death from cancer—but the first no-holds-barred chronicle of a marriage: Sheean’s Dorothy and Red, about Thompson’s fractious relationship with Sinclair Lewis.

Told with the immediacy of a conversation overheard, this revelatory book captures how the global upheavals of the twentieth century felt up close.
Deborah Cohen is the author of The War Come Home, Household Gods, and Family Secrets. She is also the Peter B. Ritzma Professor of Humanities and Professor of History at Northwestern University, focusing on modern Europe.
“As effervescent, for more than four hundred pages, as its winsome and hyperactive characters, and it blends scholarly attention to ideas like psychoanalysis and Wilsonian liberal internationalism with novelistic renderings of these writers’ dizzying trajectories abroad.”—The New Yorker

“As they follow Vladimir Putin’s invasion of Ukraine, Americans are getting an inkling of what it felt like eight decades ago when fascist dictators were on the brink of plunging Europe into war. . . . Back then the best source of news was an intrepid band of young American newspaper correspondents whose exclusive dispatches brought home word of the coming cataclysm. . . . The book is a model of its kind.”—The Wall Street Journal

“Deborah Cohen has done a remarkably powerful, enlightening and entertaining job of bringing back to life a quartet of long gone reporters. . . . Cohen writes with easy authority and a powerful narrative drive. This is a great book about great and flawed people caught up in a world going mad.”—Chicago Tribune

“Riveting . . . With the breezy scene-setting of a party reporter, the rigor of a scholar, and deep empathy for the humans behind these historic bylines, Cohen makes the correspondents come alive.”—Air Mail News

“As intimate and gripping as a novel, this brilliant book vividly conveys what it felt like to live through the shocking crises of the thirties and forties as they were occurring, when nearly anything could happen next.”—Larissa MacFarquhar, author of Strangers Drowning

“In this sterling book, Deborah Cohen follows a remarkable group of now mostly forgotten reporters as they try to make sense of a world turned upside down. The result is a shrewd and vivid work of history.”—Fredrik Logevall, Pulitzer Prize–winning author of Embers of War and JFK

“A fresh, fast-paced history of the twentieth-century’s most defining events through the eyes of the foreign correspondents who dashed off to cover them . . . a riveting narrative that unites public and private affairs with rare fluency and power.”—Maya Jasanoff, author of The Dawn Watch

“A whip-smart, propulsive book about the globe-trotting (and bed-hopping) journalists who brought foreign affairs alive. Last Call at the Hotel Imperial is a triumph.”—Daniel Immerwahr, author of How to Hide an Empire

“A kaleidoscopic epic . . . a timely and often uncanny mirror for our present moment of national reckoning.”—Deborah Baker, author of The Last Englishmen

“It is both bracing and oddly comforting to read Deborah Cohen’s luminous account of a group of writers who faced their own challenging times with courage, wit, and portable typewriters. We have much to learn from this brilliant reclamation of their commitments and their lives.”—Susan Pedersen, author of The Guardians

“Brilliantly conceived, beautifully written, this is a daring new history of the world between the wars. The work of a truly original historian . . . unforgettable.”—Adam Tooze, author of Crashed and Shutdown

“Scintillating . . . An exceptional book of cultural history that makes one long for the days of teletype, booze, spies, and scoops.”—Kirkus Reviews (starred review)

“In her engrossing account of this era, Cohen successfully interweaves international events with personal histories, creating a narrative that is well-crafted and comprehensively researched.”—Library Journal (starred review)