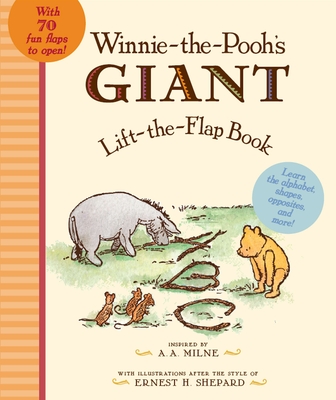 By A. A. Milne, Ernest H. Shepard (Illustrator)


Not On Our Shelves—Ships in 1-5 Days
Winnie-the-Pooh leads the way in this adventure of shapes, colors, numbers, letters, and how to tell time while exploring his oversize lift-the-flap book. Each page is packed with surprises hidden under 70 fun flaps. There is an alphabet's worth of presents to open and a clock that tells what Pooh does at each hour of the day. There is even a Hundred Acre Wood game of hide-and-seek to play. This is a primer to learning fun that children will want to join again and again!
Ernest H. Shepard was born in 1879 in England. His pictures of the Pooh characters are based on real toys owned by Christopher Robin Milne. Shepard died in 1976.

A. A. Milne was born in 1882 in London. He was a playwright and journalist as well as a poet and storyteller. His classic children's books were inspired by his son, Christopher Robin. Milne died in 1956.