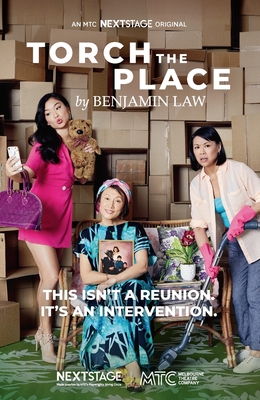 
Special Order—Subject to Availability
Teresa's mum finds it impossible to let anything go—from grudges to household objects. She thinks of her home as a museum full of irreplaceable treasures. But she's not really a curator, she's a hoarder. When her kids return home to celebrate her 60th birthday, she's over the moon to have the family back together. But this isn't a reunion. It's an intervention.Celebrated TV writer Benjamin Law (The Family Law) is one of this country's brightest literary stars. For his hysterically funny and moving playwriting debut, Law employs his effortless wit to spark joy in the clutter and find truth in those chaotic moments that bring families closer.Commissioned through MTC's NEXT STAGE Writers' Program with the support of our Playwrights Giving Circle Donors, The Ian Potter Foundation, Naomi Milgrom Foundation, The Myer Foundation, Malcolm Robertson Foundation and The University of Melbourne.
Benjamin Law is an Australian writer and broadcaster. Torch the Place is his playwriting debut. He's the author of the memoir The Family Law, the travel book Gaysia: Adventures in the Queer East and the Quarterly Essay Moral Panic 101. He's the editor of the anthology Growing Up Queer in Australia and creator and co-writer of three seasons of the award-winning SBS TV series The Family Law, based on his memoir. He has also written for over 50 publications in Australia and beyond, including The Monthly, frankie, Good Weekend, The Guardian, The Australian, Monocle and The Australian Financial Review. Law was a researcher and associate producer on Blackfella Films' Deep Water: The Real Story (SBS) and a writer on Endemol Shine's Sisters (Netflix/Ten). In 2019, he was named one of the Asian-Australian Leadership Summit's 40 Under 40 Most Influential Asian-Australians (winning the Arts, Culture & Sport category) and one of Harper's Bazaar's Visionary Men.