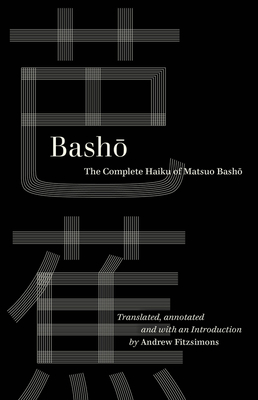 By Basho, Andrew Fitzsimons (Translated by)


On Our Shelves Now at:
This is the essential English edition of the complete poems of the eminent Japanese master of the haiku, Matsuo Bashō.

Matsuo Bashō (1644–1694) is arguably the greatest figure in the history of Japanese literature and the master of the haiku. Bashō: The Complete Haiku of Matsuo Bashō offers in English a full picture of the haiku of Bashō, 980 poems in all. Andrew Fitzsimons’ translation is the first to adhere strictly to form: all of the poems are translated following the syllabic count of the originals. This book also translates a number of Bashō’s headnotes to poems ignored by previous English-language translators.

In Fitzsimons’ beautiful rendering, Bashō is much more than a philosopher of the natural world and the leading exponent of a refined Japanese sensibility. He is also a poet of queer love and eroticism; of the city as well as the country, the indoors and the outdoors, travel and staying put; of lonesomeness as well as the desire to be alone.

His poetry explores the full range of social experience in Edo Japan as he moved among friends and followers high and low, the elite and the demi-monde, the less fortunate: poor farmers, abandoned children, disregarded elders. Bashō: The Complete Haiku of Matsuo Bashō reveals how this work speaks to our concerns today as much as it captures a Japan emerging from the Middle Ages. For dedicated scholars and those coming upon Bashō for the first time, Fitzsimons’ elegant translation—with an insightful introduction and helpful notes—allows readers to enjoy these works in all their glory.

Andrew Fitzsimons is Professor of English Language and Cultures at Gakushuin University, Tokyo, and author of The Sea of Disappointment: Thomas Kinsella’s Pursuit of the Real, as well as three books of poetry.

Bashō (1644–1694) is the greatest poet of Japan and one of the major figures of World Literature. His work has inspired haiku to become the most popular poetic form in the world.
"A real landmark publication. . . . In this endlessly rewarding work of scholarship, skill and devotion we find a Bashō not just as he is customarily seen – a philosopher poet of nature – but very much as a man of the world."
— RTÉ

"A comprehensive exploration of the writer and man crucial to Japan’s literary history. . . . Fitzsimons’ translations are fresh and unexpected."
— Japan Times