A Place at the Nayarit: How a Mexican Restaurant Nourished a Community (Hardcover) 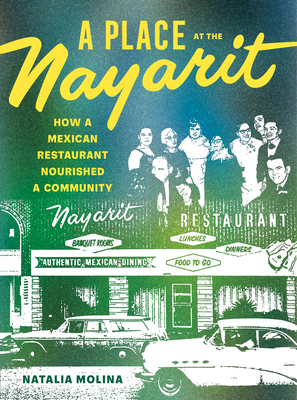 A Place at the Nayarit: How a Mexican Restaurant Nourished a Community (Hardcover)


On Our Shelves Now at:
MacArthur Genius Natalia Molina unveils the hidden history of the Nayarit, a restaurant in Los Angeles that nourished its community of Mexican immigrants with a sense of belonging.

In 1951, Doña Natalia Barraza opened the Nayarit, a Mexican restaurant in Echo Park, Los Angeles. With A Place at the Nayarit, historian Natalia Molina traces the life’s work of her grandmother, remembered by all who knew her as Doña Natalia––a generous, reserved, and extraordinarily capable woman. Doña Natalia immigrated alone from Mexico to L.A., adopted two children, and ran a successful business. She also sponsored, housed, and employed dozens of other immigrants, encouraging them to lay claim to a city long characterized by anti-Latinx racism. Together, the employees and customers of the Nayarit maintained ties to their old homes while providing one another safety and support.

The Nayarit was much more than a popular eating spot: it was an urban anchor for a robust community, a gathering space where ethnic Mexican workers and customers connected with their patria chica (their “small country”). That meant connecting with distinctive tastes, with one another, and with the city they now called home. Through deep research and vivid storytelling, Molina follows restaurant workers from the kitchen and the front of the house across borders and through the decades. These people's stories illuminate the many facets of the immigrant experience: immigrants' complex networks of family and community and the small but essential pleasures of daily life, as well as cross-currents of gender and sexuality and pressures of racism and segregation. The Nayarit was a local landmark, popular with both Hollywood stars and restaurant workers from across the city and beloved for its fresh, traditionally prepared Mexican food. But as Molina argues, it was also, and most importantly, a place where ethnic Mexicans and other Latinx L.A. residents could step into the fullness of their lives, nourishing themselves and one another. A Place at the Nayarit is a stirring exploration of how racialized minorities create a sense of belonging. It will resonate with anyone who has felt like an outsider and had a special place where they felt like an insider.
Natalia Molina is Distinguished Professor of American Studies and Ethnicity at the University of Southern California and is a 2020 MacArthur Fellow. She is the author of the award-winning books How Race Is Made in America: Immigration, Citizenship, and the Historical Power of Racial Scripts and Fit to Be Citizens? Public Health and Race in Los Angeles, 1879–1939 and coeditor of Relational Formations of Race: Theory, Method, and Practice.

"A fascinating study of a single business’s impact on a community."
— Alta Magazine