Fighting to Breathe: Race, Toxicity, and the Rise of Youth Activism in Baltimore (California Series in Public Anthropology #54) (Paperback) 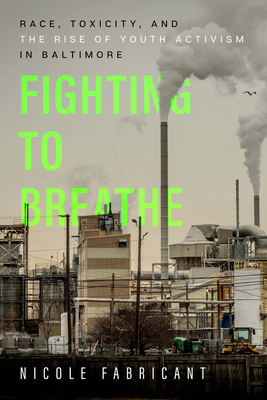 Fighting to Breathe: Race, Toxicity, and the Rise of Youth Activism in Baltimore (California Series in Public Anthropology #54) (Paperback)


On Our Shelves Now at:
Industrial toxic emissions on the South Baltimore Peninsula are among the highest in the nation. Because of the concentration of factories and other chemical industries in their neighborhoods, residents face elevated rates of lung cancer and other respiratory illnesses in addition to heart attacks, strokes, and cardiovascular disease, all of which can lead to premature death. Fighting to Breathe follows a dynamic and creative group of high school students who decided to fight back against the race- and class-based health disparities and inequality in their city. For more than a decade, student organizers stood up to unequal land use practices and the proposed construction of an incinerator and instead initiated new waste management strategies. As a Baltimore resident and activist-scholar, Nicole Fabricant documents how these young organizers came to envision, design, and create a more just and sustainable Baltimore.
Nicole Fabricant is Professor of Anthropology at Towson University in Maryland. She is the author of Mobilizing Bolivia's Displaced: Indigenous Politics and the Struggle over Land and is co–executive editor of NACLA Report on the Americas.