Knights at Court: Courtliness, Chivalry, and Courtesy from Ottonian Germany to the Italian Renaissance (Paperback) 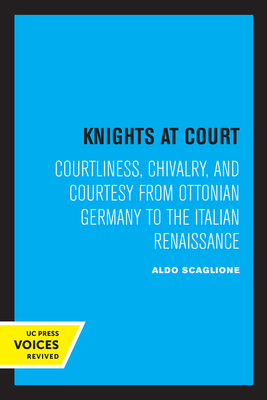 Knights at Court: Courtliness, Chivalry, and Courtesy from Ottonian Germany to the Italian Renaissance (Paperback)


Not On Our Shelves—Ships in 1-5 Days
Knights at Court is a grand tour and survey of manners, manhood, and court life in the Middle Ages, like no other in print. Composed on an epic canvas, this authoritative work traces the development of court culture and its various manifestations from the latter years of the Holy Roman Empire (ca. A.D. 1000) to the Italian Renaissance of the fifteenth and sixteenth centuries.

Leading medievalist and Renaissance scholar Aldo Scaglione offers a sweeping sociological view of three geographic areas that reveals a surprising continuity of courtly forms and motifs: German romances; the lyrical and narrative literature of northern and southern France; Italy's chivalric poetry. Scaglione discusses a broad number of texts, from early Norman and Flemish baronial chronicles to the romances of Chrétien de Troyes, the troubadours and Minnesingers. He delves into the Niebelungenlied, Dante, Petrarch, Boccaccio, and an array of treatises on conduct down to Castiglione and his successors.

All these works and Scaglione's superior scholarship attest to the enduring power over minds and hearts of a mentality that issued from a small minority of people—the courtiers and knights—in central positions of leadership and power. Knights at Court is for all scholars and students interested in "the civilizing process."

This title is part of UC Press's Voices Revived program, which commemorates University of California Press’s mission to seek out and cultivate the brightest minds and give them voice, reach, and impact. Drawing on a backlist dating to 1893, Voices Revived makes high-quality, peer-reviewed scholarship accessible once again using print-on-demand technology. This title was originally published in 1991.
Aldo Scaglione is Professor and Chairman of the Department of Italian Studies at New York University. His most recent book is The Liberal Arts and the Jesuit College System (John Benjamins 1986).