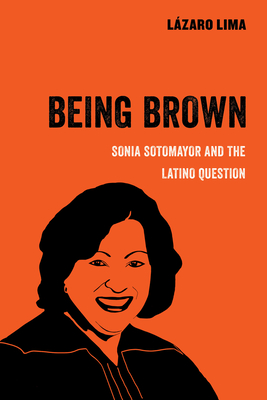 
Not On Our Shelves—Ships in 1-5 Days
Being Brown: Sonia Sotomayor and the Latino Question tells the story of the country’s first Latina Supreme Court Associate Justice’s rise to the pinnacle of American public life at a moment of profound demographic and political transformation. While Sotomayor’s confirmation appeared to signal the greater acceptance and inclusion of Latinos—the nation’s largest “minority majority”—the uncritical embrace of her status as a “possibility model” and icon paradoxically erased the fact that her success was due to civil rights policies and safeguards that no longer existed.

Being Brown analyzes Sotomayor’s story of success and accomplishment, despite seemingly insurmountable odds, in order to ask: What do we lose in democratic practice when we allow symbolic inclusion to supplant the work of meaningful political enfranchisement? In a historical moment of resurgent racism, unrelenting Latino bashing, and previously unimaginable “blood and soil” Nazism, Being Brown explains what we stand to lose when we allow democratic values to be trampled for the sake of political expediency, and demonstrates how understanding “the Latino question” can fortify democratic practice.

Being Brown provides the historical vocabulary for understanding why the Latino body politic is central to the country’s future and why Sonia Sotomayor’s biography provides an important window into understanding America, and the country’s largest minority majority, at this historical juncture. In the process, Being Brown counters “alternative facts” with historical precision and ethical clarity to invigorate the best of democratic practice at a historical moment when we need it most.

Lázaro Lima is Professor of Latino Studies in the Department of Africana, Puerto Rican, and Latino Studies at Hunter College, CUNY. He is the author of The Latino Body: Crisis Identities in American Literary and Cultural Memory and the coeditor, with Felice Picano, of Ambientes: New Queer Latino Writing.

"Being Brown reads, and feels, like the right book at the right time. The dream of the ‘Brown Democratic Commons’ that drives so much of Lázaro Lima’s thought, and his hope, in this transformative study has never felt so possible, and so impossible, at the same time."