Lessons from a Dark Time and Other Essays (Hardcover) 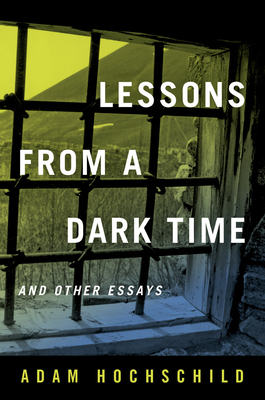 Lessons from a Dark Time and Other Essays (Hardcover)


Not On Our Shelves—Ships in 1-5 Days
In this rich collection, bestselling author Adam Hochschild has selected and updated over two dozen essays and pieces of reporting from his long career. Threaded through them all is his concern for social justice and the people who have fought for it. The articles here range from a California gun show to a Finnish prison, from a Congolese center for rape victims to the ruins of gulag camps in the Soviet Arctic, from a stroll through construction sites with an ecologically pioneering architect in India to a day on the campaign trail with Nelson Mandela. Hochschild also talks about the writers he loves, from Mark Twain to John McPhee, and explores such far-reaching topics as why so much history is badly written, what bookshelves tell us about their owners, and his front-row seat for the shocking revelation in the 1960s that the CIA had been secretly controlling dozens of supposedly independent organizations.

With the skills of a journalist, the knowledge of a historian, and the heart of an activist, Hochschild shares the stories of people who took a stand against despotism, spoke out against unjust wars and government surveillance, and dared to dream of a better and more just world.

Adam Hochschild is a journalist and author who has written on issues of human rights and social justice. His books include the bestselling King Leopold’s Ghost. He has been a finalist twice for the National Book Critics Circle Award and once for the National Book Award. He has been awarded the Los Angeles Times Book Prize and is a two-time recipient of the Gold Medal of the California Book Awards.

"This is advocacy journalism of the most persuasive kind — impassioned but never shrill or argumentative, solidly grounded in facts patiently marshaled to make the case. . . . Hochschild builds his evidence with the skill and rigor of a master bricklayer. . . . Repeatedly, in his hands, the past becomes vividly rendered prologue to the present.”
— San Francisco Chronicle

“Hochschild is adept at both journalistic and historical reporting, with the theme of humanity’s capacity for darkness woven throughout. A necessary look at a past that feels uncomfortably familiar. One is left to wonder how future essayists in Hochschild’s circle will view the world we currently inhabit."
— Library Journal

“In these essays about places around the globe, Hochschild's graceful, informative, straightforward writing always finds the telling detail as well as the people of courage in the most horrifying of situations. Focusing on some of the direst eras of recent history, these potent essays nevertheless find reason for hope in the idealism of individuals.”
— Kirkus Reviews

“A perfect complement to his earlier books, it could just as well serve as a stand-alone introduction to his work. . . . Hochschild’s characteristic blend of compassion, nuanced judgement, diligent research and literary craftsmanship is evident throughout. He is also expert at finding the telling and memorable nugget.”
— Peace News