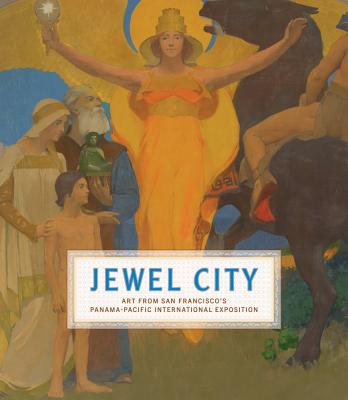 
Not On Our Shelves—Ships in 1-5 Days
Timed with the centennial of the Panama-Pacific International Exposition (PPIE) of 1915, Jewel City presents a large and representative selection of artworks from the fair, emphasizing the variety of paintings, sculptures, photographs, and prints that greeted attendees. It is unique in its focus on the works of art that were scattered among the venues of the exposition—the most comprehensive art exhibition ever shown on the West Coast. Notably, the PPIE included the first American presentations of Italian Futurism, Austrian Expressionism, and Hungarian avant-garde painting, and there were also major displays of paintings by prominent Americans, especially those working in the Impressionist style. This lavishly illustrated catalogue features works by masters such as Winslow Homer, John Singer Sargent, Claude Monet, Paul Cézanne, Robert Henri, Edward Weston, Imogen Cunningham, Edvard Munch, Oskar Kokoschka, Umberto Boccioni, and many more. The volume also explores the PPIE’s distinctive murals program, developments in the art of printmaking, and the legacy of the French Pavilion, which hosted an abundance of works by Auguste Rodin and inspired the founding and architecture of the Legion of Honor museum in San Francisco. A rich and fascinating study of a critical moment in American and European art history, Jewel City is indispensable for understanding both the United States’ and California’s role in the reception of modernism as well as the region’s historical place on the international art stage.

Published in association with the Fine Arts Museums of San Francisco.

Exhibition dates:
de Young Museum, San Francisco: October 17, 2015–January 10, 2016
James A. Ganz is curator of the Achenbach Foundation for Graphic Arts at the Fine Arts Museums of San Francisco. His recent publications include the Rembrandt’s Century, Arthur Tress: San Francisco 1964, and Impressionist Paris: City of Light.
"The editors of this densely illustrated volume have succeeded in describing the elaborateness of the PPIE production and the profound historic and cultural relevance of the entire exposition. VERDICT: Fascinating throughout, this is a definitive account of a historic San Francisco milepost and the development of its cultural firmament."
— Library Journal