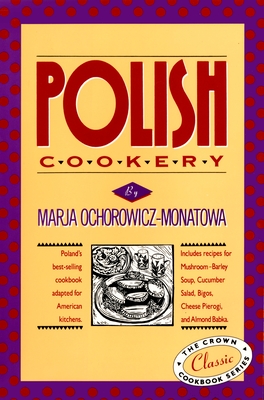 
Special Order—Subject to Availability
Poland, like France, is a country where people really know food. One can stop at a wayside inn in the country or at a modest restaurant in a working-class city neighborhood and be served a meal worth remembering. Good food is a tradition.

Polish Cookery is an American adaptation of Uniwersalna Ksiazka Kucharska (The Universal Cookbook), long the most famous standard cookbook in Poland. All weights and measures have been converted to American usage, and suitable substitutions are provided for hard-to-get ingredients. The recipes range from the familiar to the exotic and include soups like Polish Mushroom and Barley Soup, Fresh Cabbage Soup, many variations of Barszcz, the famous Polish beet soup, and Sorrel Soup with Sour Cream.

To round out the Polish meal, there are recipes for Mashed Turnips and Potatoes, Split Pea Fritters, Stuffed Kohlrabi, Fried Carrots, Mushroom Ramekins, and Pearl Barley with Dried Mushrooms.

Polish cuisine evolved over centuries, a combination of East and West, aristocratic hauteur and peasant fare. It is a rich culinary heritage that is faithfully represented here in Polish Cookery.
Marja Ochorowicz-Monatowa is the author of Uniwersalna Ksiazka Kucharska (The Universal Cookbook), a classic Polish cookbook translated and released in English as Polish Cookery.
Here are the dishes your mother used to make, from the cookbook your grandmother brought over from the old country. Crown's Classic Cookbook series features a collection of the world's best-loved foreign cookbooks, specially adapted for use in American kitchens. Authentic and comprehensive, these reasonably priced books are a welcome addition to the culinary library of any cook.

The Czechoslovak Cookbook by Joza Brizova

In Czechoslovakia, a country known for fine cooks, a copy of Varime Zdrave Chutne a Hospodarne graces nearly every kitchen. Now this best-selling Czechoslovak cookbook has been adapted for American use. The Czechoslovak Cookbook contains over 500 authentic recipes that convey the essence of Czechoslovak cuisine.

Il Talismano is and has been the one great, standard Italian cook-book for over 50 years. It is to Italians what Joy of Cooking is to Americans. Containing the best recipes for all the foods that we associate with Italian cuisine, it covers, in simple and clear form, all the regional variations of Italian cooking.

Originally published as Mein Kochbuch, German Cookery's enormous popularity in Germany is eloquent testimony to its authenticity and dependability. Now completely adapted for use in American kitchens, it will delight both the experienced German cook who is looking for new recipes and the novice who has yet to make her first Wiener Schnitzel.