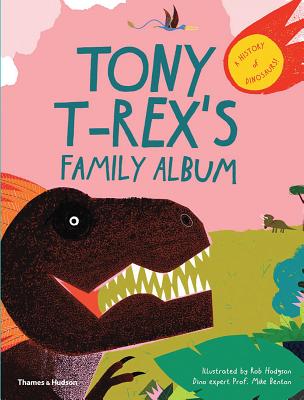 This enchanting, humorous history of dinosaurs is told by the last surviving dinosaur on Earth, Tony T-Rex.

Tony T-Rex’s Family Album is a tongue-in-cheek history of dinosaurs as told by Earth’s last surviving dinosaur. Tony pens a no-holds-barred family history, and the stories that surface reveal the defining characteristics of some of the most memorable creatures from the Jurassic and Cretaceous periods.

Tony’s memoir includes tales about his great-great-great-grandpa “Greedy Guts” Bill, the Brachiosaurus who was known to eat stones to help with indigestion; beak- mouthed Aunt Norni the Sinornithosaurus, the first dinosaur to ever attempt flight; and the black sheep of the family, a Ceratosaurus called Horace “The Horn” who, in a time of great scarcity and hunger, took a bite out of one of his hunting buddies and pursued a cannibalistic lifestyle.

Featuring the quirky illustrations of Rob Hodgson, Tony T-Rex’s Family Album stars a wild cast of creatures, rendered in a contemporary and colorful style, and a humorous approach to paleontology.

Mike Benton is a leading paleontologist.
A twist on nonfiction, this book covering 20 dinosaur species is narrated by Tony, a T·Rex. The first-person style made the info easier for our kid reviewers to understand.
— Parents