Christopher Morley: Two Classic Novels in One Volume: Parnassus on Wheels and the Haunted Bookshop (Paperback) 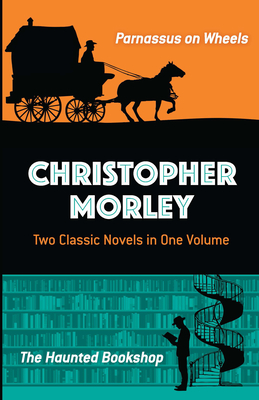 Christopher Morley: Two Classic Novels in One Volume: Parnassus on Wheels and the Haunted Bookshop (Paperback)


On Our Shelves Now at:
(This book cannot be returned.)
This single-volume edition of both of Christopher Morley's most popular novels will charm all lovers of "books about books." In the first story, Parnassus on Wheels, 39-year-old Helen McGill is weary of keeping house for her bachelor brother. When red-bearded bookseller Roger Mifflin rolls into town, she impulsively purchases his mobile bookshop. Roger promises to teach Helen the trade before retiring to write his long-overdue book, and together they hit the road for a series of winsome adventures throughout New England. Their story was praised by Boston's Evening Transcript as "graceful in style ... and] entertaining in every aspect."
Roger Mifflin returns in The Haunted Bookshop, which unfolds in his Brooklyn store, the Parnassus at Home. The spirits of great literature haunt the shop, providing an atmospheric background for the tale of a young ad man, Aubrey Gilbert, who's smitten with Roger's comely assistant, Titania. When Aubrey notices a suspicious-looking character skulking in a nearby alleyway and is attacked on his way home, the ardent suitor fears for Titania's safety and turns amateur detective. Part mystery, part spy thriller, and part romance, the humorous tale is a complete delight.
Christopher Morley (1890-1957) wrote more than 100 books, including novels, essays, and poetry. A Rhodes Scholar, he began his literary career at Doubleday and was one of the first judges of the Book of the Month Club. Morley was a founder and longtime contributor to the Saturday Review of Literature, and his enthusiasm for Sherlock Holmes stories led to his role in helping found the Baker Street Irregulars.