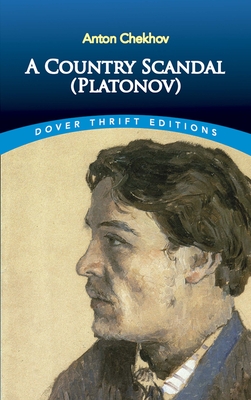 
Special Order—Subject to Availability
(This book cannot be returned.)
A Russian version of Don Juan is the focus of Chekhov's first play, a farce in which a newly arrived schoolmaster proves irresistible to the bored women of a provincial community. Platonov's charm lies in his novelty, and his seductions are strictly passive as a libidinous widow, her idealistic stepdaughter, and an earnest student vie for his romantic attentions.
Discovered in 1923, two decades after Chekhov's death, this play was written while the author was still a medical student. Adapted and translated by Alex Szogyi, it offers the trenchant wit and rich characterizations typical of the dramatist's later works. Woven amid the love affairs, suicide attempts, parties, and shootings are the customary themes of Chekhovian theater: the passions and frailties of human nature, the futility of the search for happiness, and the alternating episodes of comedy and tragedy that shape every life.
Next to Shakespeare, Anton Chekhov (1860-1904) is the most popular playwright in the English-speaking world. The Russian physician also wrote a series of remarkable short stories, in which he pioneered the stream-of-consciousness narrative technique.