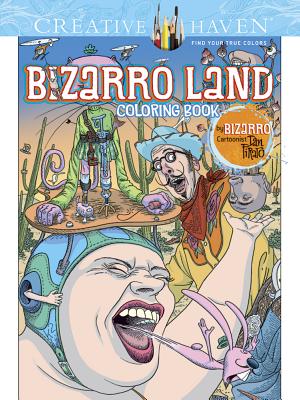 "In a league of its own -- it's truly like no other coloring book on the shelf." -- I Sniff Books
Cartoonist Dan Piraro's uniquely eccentric view of the world comes alive in these 31 original coloring book pages. His incredibly detailed art, as seen in more than 350 daily and Sunday newspapers, will captivate colorists with a taste for the offbeat and outrageous. Plus, he's included at least one of his famous "secret symbols" in each dynamic drawing. Illustrations are printed on perforated pages for easy removal and display. Specially designed for experienced colorists, Bizarro Land and other Creative Haven(R) adult coloring books offer an escape to a world of inspiration and artistic fulfillment. Each title is also an effective and fun-filled way to relax and reduce stress.

Award-winning cartoonist, painter, and stand-up comedian Dan Piraro is best known for his newspaper cartoon, Bizarro, which was first syndicated in 1985 and has acquired an international following. Appearing daily in more than 350 newspapers, Bizarro won the National Cartoonists Society's Best Cartoon Panel award in 2000, 2001, 2002, and 2016: in 2011 Piraro won their highest honor, Cartoonist of the Year.