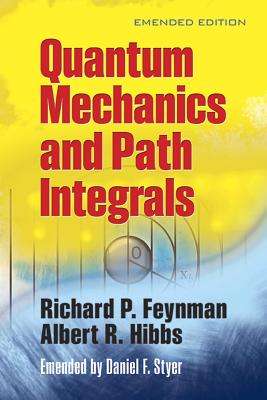 
Not On Our Shelves—Ships in 1-5 Days
(This book cannot be returned.)
From astrophysics to condensed matter theory, nearly all of modern physics employs the path integral technique. In this presentation, the developer of path integrals and one of the best-known scientists of all time, Nobel Prize-winning physicist Richard P. Feynman, presents unique insights into this method and its applications. Avoiding dense, complicated descriptions, Feynman articulates his celebrated theory in a clear, concise manner, maintaining a perfect balance between mathematics and physics.
This emended edition of the original 1965 publication corrects hundreds of typographical errors and recasts many equations for clearer comprehension. It retains the original's verve and spirit, and it is approved and endorsed by the Feynman family. The opening chapters explore the fundamental concepts of quantum mechanics and introduce path integrals. Subsequent chapters cover more advanced topics, including the perturbation method, quantum electrodynamics, and the relation of path integrals to statistical mechanics. In addition to its merit as a text for graduate courses in physics, this volume serves as an excellent resource for professionals.
Richard Feynman (1918-88) received the 1965 Nobel Prize in Physics for his contributions to the development of quantum electrodynamics. One of the best-known scientists of his generation, Feynman assisted in the development of the atomic bomb and was a prominent member of the panel that investigated the 1986 Challenger disaster.Known worldwide as the voice of NASA's Jet Propulsion Lab, Albert R. Hibbs (1924-2003) studied for his doctorate under Feynman's tutelage and transcribed and edited Feynman's lectures in quantum electrodynamics.Daniel F. Styer holds a Ph.D. from Cornell University and is the John and Marianne Schiffer Professor of Physics at Oberlin College. Richard P. Feynman: The Scientist's Scientist One of the most famous scientists of the twentieth century, and an inexhaustible source of wonderful quotes, Richard Feynman shared the 1965 Nobel Prize in Physics with Julian Schwinger and Sin-Itiro Tomonaga for his contributions to the development of quantum electrodynamics. 1965 was also the year in which Feynman and A. R. Hibbs first published Quantum Mechanics and Path Integrals, which Dover reprinted in a new edition comprehensively emended by Daniel F. Styer in 2010. In the Author's Own Words: Our freedom to doubt was born out of a struggle against authority in the early days of science. It was a very deep and strong struggle. It is our responsibility as scientists to proclaim the value of this freedom; to teach how doubt is not to be feared but welcomed and discussed; and to demand this freedom as our duty to all coming generations. I think I can safely say that nobody understands quantum mechanics. Our imagination is stretched to the utmost, not, as in fiction, to imagine things which are not really there, but just to comprehend those things which are there. To those who do not know mathematics it is difficult to get across a real feeling as to the beauty, the deepest beauty, of nature. . . . If you want to learn about nature, to appreciate nature, it is necessary to understand the language that she speaks in. -- Richard P. Feynman