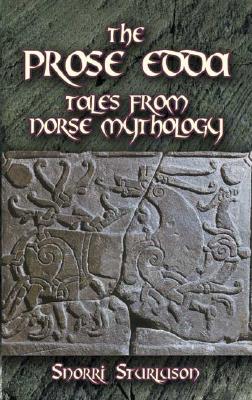 
Backordered
(This book cannot be returned.)
Gods and giants bestride these ancient tales, in which warrior queens and noble heroes battle with elves, dwarves, and fearsome monsters. Spanning the dawn of the world's creation to its fiery destruction, these gripping Norse legends chronicle the triumphs and tragedies of a lost era. Resounding with a poetic instinct for the picturesque, the dramatic, and the human, they form vivid portraits of the characters' personalities. They also depict the comic and disastrous results of ambition, passion, and destiny.
The wellspring of modern knowledge of Norse mythology, these sagas preserved the Vikings' narrative style from an invading European influence. Iceland's great literary genius, Snorri Sturluson (1179-1241), combined oral traditions, genealogical records, and old songs to immortalize his country's glorious past. Edda means poetic art, and Sturluson's guidebook for Icelandic poets has been a timeless inspiration for generations of writers around the world, including Wagner, Borges, and Tolkien.