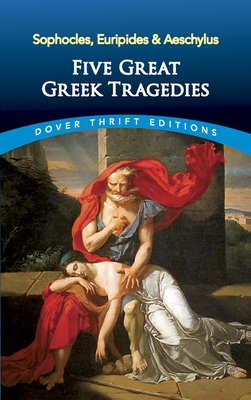 This remarkably low-priced anthology brings together five of the greatest, most studied, and most performed Greek tragedies, each in an outstanding translation:
- Oedipus Rex and Electra by Sophocles (translated by George Young), in which the much-admired playwright explores the individual's search for truth and self-knowledge
- Medea and Bacchae by Euripides (translated by Henry Hart Milman), favorites with modern audiences for their psychological subtlety and the humanity of their characters
- Prometheus Bound by Aeschylus (translated by George Thomson), a monumental work that examines relations between humans and the gods
These masterpieces of world literature represent the very apex of Greek drama and are essential for both the home library and the classroom.

He was not of an age, but for all time, declared Ben Jonson of his contemporary William Shakespeare (1564-1616). Jonson's praise is especially prescient, since at the turn of the 17th century Shakespeare was but one of many popular London playwrights and none of his dramas were printed in his lifetime. The reason so many of his works survive is because two of his actor friends, with the assistance of Jonson, assembled and published the First Folio edition of 1623.