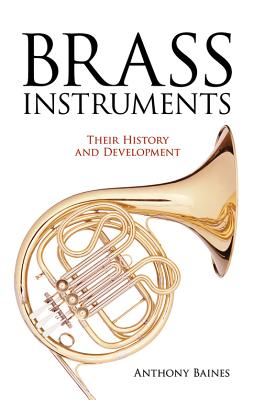 
Not On Our Shelves—Ships in 1-5 Days
(This book cannot be returned.)
In this readable, well-researched history, a distinguished authority on musical instruments offers a concise survey of the evolution of trumpets, trombones, bugles, cornets, French horns, tubas, and other brass wind instruments. The story begins with such primitive contrivances as bark trumpets, conch shells and perforated animal horns, bronze trumpets used by the ancient Danes and Celts, large Roman horns, and other devices.
During the medieval period, a large number of curved instruments or horns of various shapes and sizes developed, including trumpets, looped horns, the sackbut (forerunner of the trombone) and others, while the Renaissance saw the introduction of the slide trumpet. In the nineteenth century, the advent of valved instruments ushered in yet another new era.
In this extensively revised and updated edition, Mr. Baines documents the various states of the evolution of brass instruments with immense learning and a wealth of detail. The text is supplemented by over 140 black-and-white illustrations as well as 48 music examples. The result is a scholarly yet accessible account that remains an indispensable resource for any brass player or music historian.
Anthony Baines (1912-97) was an English organologist who produced a wide variety of works on the history of musical instruments. He was a founding member of the Galpin Society, formed in 1946 to further research into the history, construction, development, and use of musical instruments.