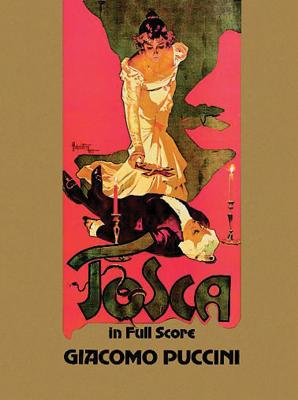 When Giacomo Puccini saw Sarah Bernhardt in a production of La Tosca by French playwright Victorien Sardou, he knew immediately that its highly dramatic plot, turning on lust, revenge, and betrayal, was made for opera. When he heard that Verdi was interested in the play, his own interest in the property deepened. It was Puccini alone who ultimately brought the project to fruition and transformed Sardou's work into an operatic tour de force.
Tosca, with a libretto by Giuseppe Giacosa and Luigi Illica, was first presented in Rome at the Teatro Costanzi in January 1900. Since then, audiences drawn by its intense drama (Puccini himself referred to it as a melodrama), sumptuous scoring, and two of opera's most famous arias ―Tosca's Vissi d'arte and Cavaradossi's E lucevan le stelle ― have made Tosca one of the most performed and recorded operas of all time. This finely made edition is reprinted from the authoritative full-score edition printed shortly after the opera's premiere.

In addition to Tosca, Italian composer Giacomo Puccini (1858-1924) created La Boheme, Madama Butterfly, Turandot, and other beloved operas. He was the most popular opera composer in the world at the time of his death, and his works remain standards of the repertoire.