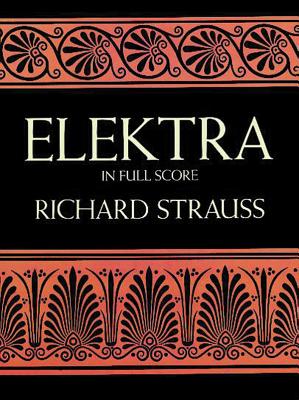 Composed in 1906-1908 to a libretto by Hugo von Hofmannsthal, Elektra scandalized audiences of the day with its horrific retelling of the Greek story and its startling level of dissonance. Today, with the shock of the new worn off and the once-fearful dissonance now widely accepted, the score can be more easily appreciated for its extravagant invention of musical ideas and virtuosic use of instrumental sonorities to characterize both persons and actions. Further, in his use of a single germinal chord which pervades the entire score, Strauss anticipated a technique used by later 20th-century composers.
Now a landmark of modern opera, Elektra is among the best-known of Strauss's works. In this remarkably inexpensive Dover volume, it is reprinted, complete and unabridged, directly from the authoritative F rstner edition.

A German composer and conductor of the late Romantic and early Modern eras, Richard Strauss (1864-1949) is particularly celebrated for his operas, Lieder, and tone poems.