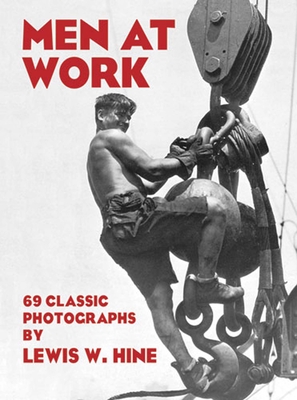 
Backordered
(This book cannot be returned.)
I will take you into the heart of modern industry where machines and skyscrapers are being made, where the character of the men is being put into the motors, the airplanes, the dynamos upon which the life and happiness of millions of us depend.
Lewis H. Hine (1874-1940), one of America's best photographers, wrote this in his introduction to Men at Work, a book, he said, about "men of courage, skill, daring, and imagination." And in 69 attention-riveting photographs, including those of the construction of the Empire State Building, he makes us believe once again in the heroism of ordinary people.
Originally published in 1932, and now exceedingly rare, Men at Work takes us into coal mines, heavy industry, and tire and airplane factories. We see railroad workers in the shop, on the tracks and as train crews. Foundation men, connecters, bellmen, hoisters, derrick men, plumbers-up, riveters, buckers-up, catchers, burners, heaters, welders, bolt boys, sky boys -- the various trades of construction workers -- build from bedrock that great monument and symbol of twentieth-century life, the Empire State Building. For this edition 18 additional and extraordinary Hine photographs of this construction have been added.
Hine, widely known for his pictures of immigrants arriving at Ellis Island and his studies of child labor, combines enormous technical ability with sensitivity and deep feeling. The people in this book do their job with pride, dignity, and skill. They are in control of the giant machines they use, at home in space, not dwarfed by their constructions.