Fatal Treasure: Greed and Death, Emeralds and Gold, and the Obsessive Search for the Legendary Ghost Galleon Atocha (Paperback) 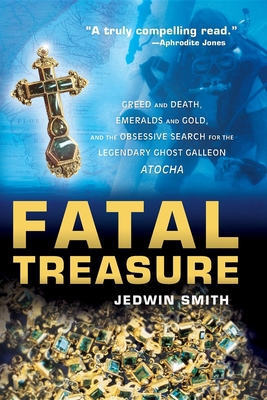 Fatal Treasure: Greed and Death, Emeralds and Gold, and the Obsessive Search for the Legendary Ghost Galleon Atocha (Paperback)


Not On Our Shelves—Ships in 1-5 Days
In real life-especially off the Florida coast-things can have fatal consequences. Fatal Treasure is a truly compelling read.
-Aphrodite Jones, New York Times bestselling author of Cruel Sacrifice and All She Wanted In 1622, hundreds of people lost their lives to the curse of the Spanish galleon Atocha-and they would not be the last. Fatal Treasure combines the rousing adventure of Ship of Gold in the Deep Blue Sea with the compelling characters and local color of Midnight in the Garden of Good and Evil. It tells the powerful true story of the relentless quest to find the Atocha and reclaim her priceless treasures from the sea. You'll follow Mel Fisher, his family, and their intrepid team of treasure hunters as they dive beneath the treacherous waters of the Florida Straits and scour the ocean floor in search of gold, silver, and emeralds. And you'll discover that nearly four centuries after the shipwreck, the curse of the Atocha is still a deadly force. On this day, the sea once again relinquished its hold on the riches and glory of seventeenth-century Spain. And by the grace of God, I would share the moment of glory . . . . I was reaching for my eighth emerald, another big one, when the invisible hands squeezed my trachea. In desperation, I clutched at my throat to pry away the enemy's fingers. But no one had hold of me.
-From the Prologue.
JEDWIN SMITH is a journalist for the Atlanta Journal-Constitution who has twice been nominated for the Pulitzer Prize. He has been working with the Fisher family since the 1980s. Smith has found emeralds and pieces of eight while hunting with the crew, and his brother also worked for the Fishers on the treasure hunt.