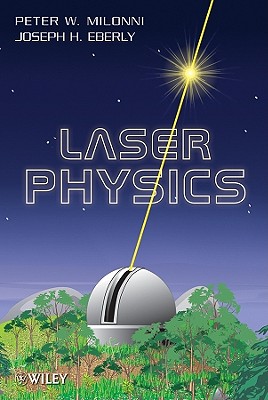 
Not On Our Shelves—Ships in 1-5 Days
(This book cannot be returned.)
Although the basic principles of lasers have remained unchanged in the past 20 years, there has been a shift in the kinds of lasers generating interest. Providing a comprehensive introduction to the operating principles and applications of lasers, this second edition of the classic book on the subject reveals the latest developments and applications of lasers. Placing more emphasis on applications of lasers and on optical physics, the book's self-contained discussions will appeal to physicists, chemists, optical scientists, engineers, and advanced undergraduate students.
PETER W. MILONNI is currently Laboratory Fellow and Laboratory Associate in the Complex Systems Group of the Theoretical Division, Los Alamos National Laboratory and Research Professor of Physics at the University of Rochester. Dr. Milonni is the author or coauthor of several books and has published research and review papers on both pure and applied physics. He has served for many years on a number of editorial boards, and was the recipient of the Max Born Award of the Optical Society of America in 2008. His research interests are in the areas of quantum optics and electrodynamics, especially in connection with the quantum and fluctuation properties of electromagnetic radiation and its interaction with matter. JOSEPH H. EBERLY is currently Andrew Carnegie Professor Physics and Professor of Optics at the University of Rochester. A past president of the Optical Society of America, he has contributed to the research literature on theoretical quantum optics and laser physics, with interests in multipulse propogation, high-field atomic physics, quantum entanglement, cavity QED, and relaxation dynamics. Dr. Eberly received the Smoluchowski Medal of the Physical Society of Poland in 1987 and the Charles Hard Townes Award of the Optical Society of America in 1994. He is the coauthor of two books and coeditor of several conference proceedings. He is the founding editor of Optics Express and has served on a number of editorial and advisory boards.