The Big Stick: The Limits of Soft Power and the Necessity of Military Force (Hardcover) 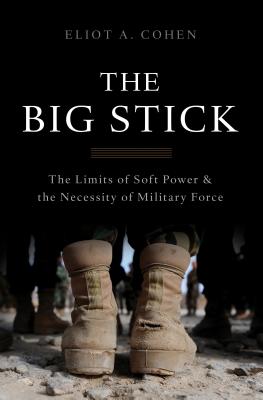 The Big Stick: The Limits of Soft Power and the Necessity of Military Force (Hardcover)

By Eliot A. Cohen


Not On Our Shelves—Ships in 1-5 Days
"Speak softly and carry a big stick" Theodore Roosevelt famously said in 1901, when the United States was emerging as a great power. It was the right sentiment, perhaps, in an age of imperial rivalry but today many Americans doubt the utility of their global military presence, thinking it outdated, unnecessary or even dangerous.

In The Big Stick, Eliot A. Cohen-a scholar and practitioner of international relations-disagrees. He argues that hard power remains essential for American foreign policy. While acknowledging that the US must be careful about why, when, and how it uses force, he insists that its international role is as critical as ever, and armed force is vital to that role.

Cohen explains that American leaders must learn to use hard power in new ways and for new circumstances. The rise of a well-armed China, Russia's conquest of Crimea and eastern Ukraine, nuclear threats from North Korea and Iran, and the spread of radical Islamist movements like ISIS are some of the key threats to global peace. If the United States relinquishes its position as a strong but prudent military power, and fails to accept its role as the guardian of a stable world order we run the risk of unleashing disorder, violence and tyranny on a scale not seen since the 1930s. The US is still, as Madeleine Albright once dubbed it, "the indispensable nation."
Eliot A. Cohen is the Robert E. Osgood Professor of Strategic Studies at Johns Hopkins University's School of Advanced International Studies (SAIS). He is the prize-winning author of several books, including Supreme Command and Conquered into Liberty, and former counselor of the Department of State.
Kori Schake, Foreign Affairs
"Insightful."

Walter Russell Mead, The Wall Street Journal
"A balanced and sensitive analysis of America's military record since the attacks of Sept. 11, 2001...Mr. Cohen's lucid book is a must-read for anyone interested in military might - and how it can help us maintain the edge we need in this treacherous age."

Jennifer Senior, The New York Times
"Even if you disagree with Mr. Cohen... it's easy to spend time in his company. He writes thoughtfully, methodically, with unfussy erudition... an unfashionable, unabashed and - above all - unwavering case for the use of force in the service of American security and ideals."

John Hillen, War on the Rocks
"When one looks at the world as it is rather than how one may want it to be...Cohen's prescriptions make sense... I hope the valuable strategic analysis in this book will be taken up by the new administration."

Brian Stewart, National Review
"A bracing argument that restores this woefully neglected element of statecraft to its proper position as 'the last argument of kings - or presidents.'"

Mackubin Thomas Owens, The Weekly Standard
"An excellent response to what can only be called strategic happy talk...an immensely useful assessment of military power and why it remains necessary"

Rosa Brooks, The Washington Post
"A vision of American power that's been largely stripped of illusion...a thoughtful and erudite book...To those who ask, 'Why the United States? Cohen offers an implicit challenge: Who else?"

General (Ret.) David Petraeus, commander of the Surges in Iraq and Afghanistan, subsequently Director of the CIA, and now Chairman of the KKR Global Institute
"A brilliant, timely, hugely important, and very well-reasoned book that considers the past fifteen years of war, examines contemporary challenges, and makes a compelling case for American leadership in the world, albeit leadership exercised prudently and thoughtfully, and in a manner that is sustainable. The guidelines Eliot Cohen proposes for the use of force are particularly valuable as America prepares to transition to a new administration."

Michael Chertoff, former US Secretary of Homeland Security
"At a time when threats to global peace and order are multiplying, Professor Cohen lays out a clear, balanced vision for the critical role American military power and leadership must take in securing our world. Vital reading as a new US Administration prepares to take power."


Professor Andrew Roberts, author of Masters and Commanders: How Roosevelt, Churchill, Marshall and Alanbrooke Won the War in the West
"Any number of commentators on grand strategy are intelligent and well-informed, but Eliot Cohen is also brave and wise. Brave in unapologetically taking on the new consensus that lauds soft power over hard and trumpets neo-isolationism for the United States; wise in his analysis of what America can and must do to stay as the Top Dog world power in the 21st century. Refreshingly iconoclastic in his opinions and impeccably scholarly in his overview of American military policy from Teddy Roosevelt through to Barack Obama, this is the most eloquent defense of the continued necessity of American hard power you're ever likely to need."


Ambassador William J. Burns, President, Carnegie Endowment for International Peace and former Deputy Secretary of State
"An eloquent argument for hard power's enduring importance in an age of global disorder and domestic diffidence. Drawing on his superb grasp of history, Eliot Cohen describes in clear and compelling detail how military force and strategy can help enable effective American diplomacy and global leadership in the 21st century."


Eric Edelman, former Under Secretary of Defense for Policy, 2005-2009
"A century before Barack Obama, the Nobel Peace Prize was awarded to President Theodore Roosevelt for his role in ending the Russo-Japanese War. Roosevelt's watchword for diplomacy was "speak softly and carry a big stick." Eliot Cohen has now presented the most compelling case yet for why the "big stick" remains as essential for managing the national security challenges of the 21st Century as it was one hundred years ago. This elegantly argued and persuasive book will be essential reading for the new President's foreign and security policy team as they tackle their new responsibilities."


Peter Mansoor, General Raymond E. Mason Jr. Chair of Military History, The Ohio State University
"To a people increasingly enamored with soft power and tiring of their role as "the indispensable nation," Eliot Cohen makes a cogent argument for the use of military force in American foreign policy. The Big Stick is the antidote to the siren song of neo-isolationism as well as to the argument that history-and warfare-have ended."

Professor Philip Zelikow, director of the Miller Center of Public Affairs, University of Virginia
"Wither America's military? In a world of disorder and plenty of disillusion from recent wars, the question could hardly be more timely. Eliot A. Cohen has written a remarkably sensible and balanced guide. Yes, he makes the case for American military power in this uncertain world. But his advice is historically grounded and honest about American weaknesses as well as the strengths. In the spirit of Theodore Roosevelt, Cohen urges preparedness, not belligerence. His analysis is not deformed by partisanship and his prose is a pleasure to read."