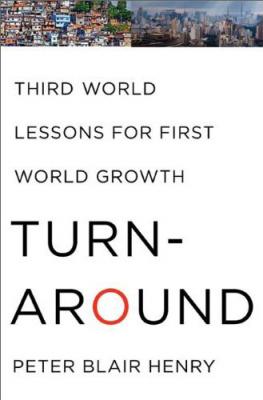 
Special Order—Subject to Availability
Thirty years ago, China seemed hopelessly mired in poverty, Mexico triggered the Third World Debt Crisis, and Brazil suffered under hyperinflation. Since then, these and other developing countries have turned themselves around, while First World nations, battered by crises, depend more than ever on sustained growth in emerging markets.

In Turnaround, economist Peter Blair Henry argues that the secret to emerging countries' success (and ours) is discipline -- sustained commitment to a pragmatic growth strategy. With the global economy teetering on the brink, the stakes are higher than ever. And because stakes are so high for all nations, we need less polarization and more focus on facts to answer the fundamental question: which policy reforms, implemented under what circumstances, actually increase economic efficiency? Pushing past the tired debates, Henry shows that the stock market's forecasts of policy impact provide an important complement to traditional measures.

Through examples ranging from the drastic income disparity between Barbados and his native Jamaica to the "catch up" economics of China and the taming of inflation in Latin America, Henry shows that in much of the emerging world the policy pendulum now swings toward prudence and self-control. With similar discipline and a dash of humility, he concludes, the First World may yet recover and create long-term prosperity for all its citizens.

Bold, rational, and forward-looking, Turnaround offers vital lessons for developed and developing nations in search of stability and growth.
Peter Blair Henry is the Dean of the Stern School of Business at NYU. Before taking this position in January 2010, he was the Konosuke Matsushita Professor of International Economics at Stanford, where he was a faculty scholar, the Associate Director of the Center for Global Business and the Economy at Stanford's business school, and a Senior Fellow at the Stanford Institute for Economic Policy Research.

He served as a member of the Obama transition team and is a member of the President's Commission on White House Fellowships. He is also a board member at the National Bureau of Economic Research, a member of the Board of Directors of Kraft Foods, a nonresident Senior Fellow at the Brookings Institution, and a member of the Council on Foreign Relations. He was a National Fellow at the Hoover Institution and a Rhodes Scholar. While receiving his Ph.D in economics at MIT, he served as an economic advisor to the Governors of the Bank of Jamaica (his native country) and the Eastern Caribbean Central Bank.
“Turnaround weaves together a medley of history and data.... Henry's interpretation of data can be illuminating.”
—USA Today

“A thoughtful...book about the world's financial ills.... It is not an easy sale these days for governments to reduce spending, increase their revenues, and devalue currencies, but judging from Henry's very reasoned arguments and expansive case histories, it might be the only solution.”
—Booklist

“A concise and controversial statement of what needs to be overcome if the world economy is to return to the path of growth and stability.”
—Kirkus Reviews

“Peter Henry had the original thought that the experiences of ‘emerging economies' may contain lessons for advanced economies. He shows that they do, but not in any crude cookie-cutter way. The vital common thread is the capacity to form a future-oriented policy and stick to it with discipline. This is why we—all of us—need grown-ups.”
—Robert M. Solow, Nobel Laureate in Economics (1987)

“A riveting tour of postwar world growth, replete with policy successes and devastating mistakes, Turnaround is essential reading for anyone willing to be convinced that learning should be a two-way street between advanced and developing economies.”
—Michael Spence, Nobel Laureate in Economics (2001)

“A compelling analysis of the trends that are transforming emerging markets and a practical assessment of what it all means for the global economy.”
—Kenneth I. Chenault, Chairman and CEO, American Express Company

“Tempering the ‘dismal science' with a healthy dose of optimism, Turnaround exposes sobering realities of the world economy, yet paints a hopeful picture of prosperity for the countries of Africa and, indeed, all nations.”
—Her Excellency Ellen Johnson Sirleaf, President of Liberia and Nobel Peace Laureate (2011)

“A child of the Third World risen to First World academic prominence, Peter Henry effectively bridges both worlds, offering a vision of what leaders can achieve if they take the long road, implementing sensible economic policies with accountability, integrity, and persistence.”
—Ngozi Okonjo-Iweala, Minister of Finance of Nigeria

“A fortuitously easy-to-read guide to success tips from the ‘Third World.'”
—Darryl Lorenzo Wellington, The Crisis

“[An] impressive new book.... Turnaround is intended to instruct and Henry's argument, which I would characterize as a pitch for enlightened austerity, is straightforward.”
—Peter A. Coclanis, Charlotte Observer

“Turnaround is a welcome addition to a global development literature.... Besides providing a happy middle ground, Henry has produced one of a dwindling number of papers in the American Economic Review and can also be understood by readers who haven't passed advanced classes in statistics and algebra.”
—Charles Kenny, Washington Monthly

“Turnaround straddles the developed and developing world. It reaches conclusions that run counter to a growing sense among many Americans that globalization has hurt the U.S. economy more than it has helped, especially for the middle class.... [Henry's] strongest pitch may be a sort of technocratic optimism: the resounding belief that if developing countries can reverse a cycle of poverty and economic dysfunction and begin to grow rapidly, then the United States can, too.”
—Jim Tankersley, Washington Post