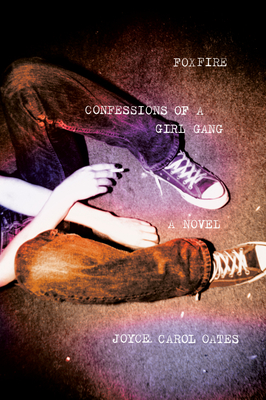 The time is the 1950s. The place is a blue-collar town in upstate New York, where five high school girls join a gang dedicated to pride, power, and vengeance on a world that seems made to denigrate and destroy them.

Here is the secret history of a sisterhood of blood, a haven from a world of male oppressors, marked by a liberating fury that burns too hot to last. Above all, it is the story of Legs Sadovsky, with her lean, on-the-edge, icy beauty, whose nerve, muscle, hate, and hurt make her the spark of Foxfire: its guiding spirit, its burning core.

At once brutal and lyrical, this is a careening joyride of a novel—charged with outlaw energy and lit by intense emotion. Amid scenes of violence and vengeance lies this novel’s greatest power: the exquisite, astonishing rendering of the bonds that link the Foxfire girls together. Foxfire reaffirms Joyce Carol Oates’s place at the very summit of American writing.
In addition to many prize-winning and bestselling novels, including We Were the Mulvaneys, A Book of American Martyrs, Black Water, Because It Is Bitter and Because It Is My Heart, and Broke Heart Blues, Joyce Carol Oates is the author of a number of works of gothic fiction including Haunted: Tales of the Grotesque, a World Fantasy Award nominee; and Zombie, winner of the Bram Stoker Award for Best Horror Novel, awarded by the Horror Writers' Association. In 1994, Oates received the Bram Stoker Lifetime Achievement Award in Horror Fiction. She is the editor of American Gothic Tales. She lives in Princeton, New Jersey.
Praise for Foxfire