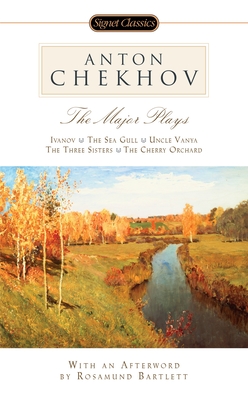 “Let the things that happen onstage be just as complex and yet just as simple as they are in life,” Chekhov once declared. “For instance, people are having a meal, just having a meal, but at the same time, their happiness is being created, or their lives are being smashed up.” So it is that his plays express life through subtle construction, everyday dialogue, and an electrically charged atmosphere in which even the most casual words and actions assume great importance in his characters’ lives. This principle sets his plays apart from the rest, steering them clear of melodrama, and draws the audience into the lives of Chekhov’s colorful characters. Because of his adherence to realism, the playwright has been called an “incomparable artist of life.”*

“What makes his work great is that it can be felt and understood not only by any Russian but by anybody in the world.”—*Leo Tolstoy

With a Foreword by Robert Brustein and an Afterword by Rosamund Bartlett
Anton Pavlovich Chekhov (1860–1904) was born in Taganrog, Russia, on the Sea of Azov, the son of a small shopkeeper and the grandson of a serf. At sixteen, he was left to fend for himself while his father fled with the rest of the family to Moscow, escaping debtors’ prison. After finishing school in his native town, Chekhov went to Moscow, where, with the aid of a scholarship, he entered the University to study medicine. To help with the family finances, he started publishing tales, anecdotes, jokes, and articles. By the time he took his medical degree in 1884, writing had become his main interest and occupation. His literary reputation grew with the publication of the book Motley Stories (1886). That same year, he made the acquaintance of Alexei Suvorin, owner of the newspaper New Time, who invited him to contribute longer tales at a higher rate. In 1888, he was awarded the Pushkin Prize for the collection In the Twilight. This and the publication of the long story The Steppe marked the beginning of Chekhov’s recognition as one of Russia’s leading writers. In the years following, he produced his first serious full-length play, Ivanov (1887), as well as a steady stream of short stories. The first production of his famous play The Sea Gull (1896) was a miserable failure. But in 1898, the play was revived at the Moscow Art Theater and proved a resounding success, as did the Theater’s productions of The Three Sisters and The Cherry Orchard. In 1901, he married the actress Olga Knipper. He died of tuberculosis.

Born in New York City in 1927, Robert Brustein is one of the country’s preeminent drama critics. He was Dean of the Yale School of Drama from 1966 to 1979 and then became director of the Loeb Drama Center and artistic director of American Repertory Theatre Company at Harvard, where he served until 2002. Among his influential books are The Third Theatre and Dumbocracy in America.

Rosamund Bartlett is a writer, scholar, translator, and lecturer specializing in Russian literature, music, and cultural history. Among her publications are Tolstoy: A Russian Life; the Oxford University Press translation of Anna Karenina; Chekhov: Scenes from a Life; and a Chekhov anthology entitled About Love and Other Stories, which was shortlisted for the Weidenfeld European Translation Prize.