Much Ado About Nothing (Mass Market) 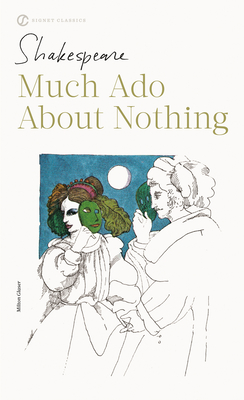 Much Ado About Nothing (Mass Market)


Not On Our Shelves—Ships in 1-5 Days
The Signet Classics edition of William Shakespeare's grand romantic comedy.

Much Ado About Nothing casts the lovers Benedick and Beatrice in a witty war of words while the young Claudio is tricked into believing his love Hero has been unfaithful in this play that combines robust humor with explorations on honor and shame.

This revised Signet Classics edition includes unique features such as:

• An overview of Shakespeare's life, world, and theater
• A special introduction to the play by the editor, David L. Stevenson
• A note on the sources from which Shakespeare derived Much Ado About Nothing
• Dramatic criticism from Charles Gildon, Lewis Carroll, George Bernard Shaw, and others
• A comprehensive stage and screen history of notable actors, directors, and productions
• Text, notes, and commentaries printed in the clearest, most readable text
• And more...
William Shakespeare (1564–1616) was a poet, playwright, and actor who is widely regarded as one of the most influential writers in the history of the English language. Often referred to as the Bard of Avon, Shakespeare's vast body of work includes comedic, tragic, and historical plays; poems; and 154 sonnets. His dramatic works have been translated into every major language and are performed more often than those of any other playwright.