The Taming of the Shrew (Shakespeare, Signet Classic) (Mass Market) 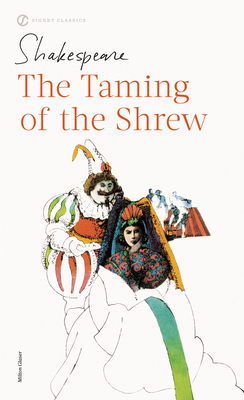 The Taming of the Shrew (Shakespeare, Signet Classic) (Mass Market)

Featuring the tumultuous relationship of Petruchio and the headstrong Katherina, this popular comedy goes beyond courtship to explore what happens after a determined man marries a woman who refuses to be tamed.

This revised Signet Classics edition includes unique features such as:

• An overview of Shakespeare's life, world, and theater
• A special introduction to the play by the editor, Robert B. Heilman
• Sources from which Shakespeare derived The Taming of the Shrew
• Dramatic criticism from Richard Hosley, Maynard Mack, Germaine Greer, and others
• A comprehensive stage and screen history of notable actors, directors, and productions
• Text, notes, and commentaries printed in the clearest, most readable text
• And more...
William Shakespeare (1564–1616) was a poet, playwright, and actor who is widely regarded as one of the most influential writers in the history of the English language. Often referred to as the Bard of Avon, Shakespeare's vast body of work includes comedic, tragic, and historical plays; poems; and 154 sonnets. His dramatic works have been translated into every major language and are performed more often than those of any other playwright.