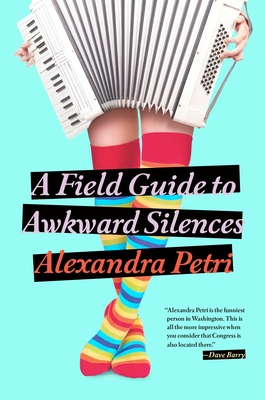 She auditioned for America’s Next Top Model. She lost Jeopardy! by answering “Who is that dude?” One time, she let some cult members baptize her, just to be polite. Alexandra Petri is a connoisseur of the kind of awkwardness most people spend lifetimes avoiding. If John Hodgman and Amy Sedaris had a baby. . .they would never let Petri babysit it.

Here, the Washington Post columnist turns her satirical eye on her own life—with hilarious results. And she’s here to tell you that interesting things start to happen when you stop caring what people think.
Some people are born awkward. Some achieve awkwardness. Some have awkwardness thrust upon them. Alexandra Petri is all three. She is a Washington Post columnist and blogger, an International Pun Champion, a playwright, and a Jeopardy! loser, and she’s been on your TV a couple of times. She is also a congressman’s kid, if that will make you buy this book! When she remembers, she does stand-up comedy too.
“Alexandra Petri is the funniest person in Washington. This is all the more impressive when you consider that Congress is also located there.”—Dave Barry

“Alexandra Petri is so hilarious and brilliant, she’s like the love child of Oscar Wilde and Dorothy Parker.”—Megan Amram, author of Science…for Her!

“These tales of surviving spectacular awkwardness are endearing and hilarious. Petri is the brunch date we want every Sunday.  We loved this book!”—Lisa Scottoline and Francesca Serritella, coauthors of Does This Beach Make Me Look Fat?

“Washington Post columnist Petri nails the travails of being a young adult...She brings her distinctive voice—honest, relatable, and laugh-out-loud funny—to this collection of essays that read like missives from your best friend.”—Booklist

“The Post’s go-to writer for laughs.”—Washingtonian