One Day in the Life of Ivan Denisovich (Paperback) 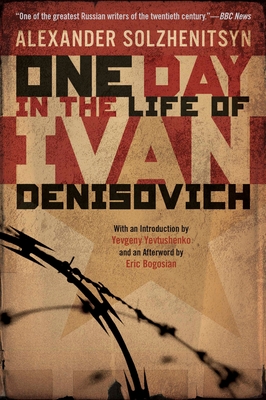 One Day in the Life of Ivan Denisovich (Paperback)


Not On Our Shelves—Ships in 1-5 Days
The first published novel from the controversial Nobel Prize winning Russian author of The Gulag Archipelago.

In the madness of World War II, a dutiful Russian soldier is wrongfully convicted of treason and sentenced to ten years in a Siberian labor camp. So begins this masterpiece of modern Russian fiction, a harrowing account of a man who has conceded to all things evil with dignity and strength.

First published in 1962, One Day in the Life of Ivan Denisovich is considered one of the most significant works ever to emerge from Soviet Russia. Illuminating a dark chapter in Russian history, it is at once a graphic picture of work camp life and a moving tribute to man’s will to prevail over relentless dehumanization.

Includes an Introduction by Yevgeny Yevtushenko
and an Afterword by Eric Bogosian
Alexander Solzhenitsyn was born in 1918, a year after the Bolsheviks stormed to power throughout Russia. He studied at the University of Rostov and served with distinction in the Russian Army during World War II. In 1945, he was arrested and imprisoned in a labor camp for eight years because he had allegedly made a derogatory remark about Stalin. Released in 1953 after the death of Stalin, he was forced to live in Central Asia, where he remained until Premier Khrushchev’s historic “secret speech” denouncing Stalin in 1956. Rehabilitated in 1957, Solzhenitsyn moved to Ryazin, married a chemistry student, and began to teach mathematics at the local school. In his spare time he started to write. In 1970, Solzhenitsyn received the Nobel Prize for Literature. Four years later the Soviet Union revoked his citizenship, and he was deported. Solzhenitsyn settled in Vermont in 1984, but eventually returned to Russia in 1994, after the collapse of communism. He died in 2008.
“A masterpiece...Squarely in the mainstream of Russia’s great literary traditions.”—The Nation

“Cannot fail to arouse bitterness and pain in the heart of the reader. A literary and political event of the first magnitude.”—New Statesman

“Stark...the story of how one falsely accused convict and his fellow prisoners survived or perished in an arctic slave labor camp after the war.”—Time

“Both as a political tract and as a literary work, it is in the Doctor Zhivago category.”—Washington Post