Philosophy: Who Needs It (Mass Market) 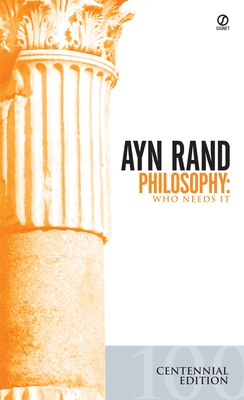 Philosophy: Who Needs It (Mass Market)


Not On Our Shelves—Ships in 1-5 Days
This collection of essays was the last work planned by Ayn Rand before her death in 1982. In it, she summarizes her view of philosophy and deals with a broad spectrum of topics.

According to Ayn Rand, the choice we make is not whether to have a philosophy, but which one to have: rational, conscious, and therefore practical; or contradictory, unidentified, and ultimately lethal.

Written with all the clarity and eloquence that have placed Ayn Rand’s Objectivist philosophy in the mainstream of American thought, these essays range over such basic issues as education, morality, censorship, and inflation to prove that philosophy is the fundamental force in all our lives.
Born February 2, 1905, Ayn Rand published her first novel, We the Living, in 1936. Anthem followed in 1938. It was with the publication of The Fountainhead (1943) and Atlas Shrugged (1957) that she achieved her spectacular success. Rand’s unique philosophy, Objectivism, has gained a worldwide audience. The fundamentals of her philosophy are put forth in three nonfiction books, Introduction to Objectivist Epistemology, The Virtues of Selfishness, and Capitalism: The Unknown Ideal. They are all available in Signet editions, as is the magnificent statement of her artistic credo, The Romantic Manifesto.