Boys of Steel: The Creators of Superman (Paperback) 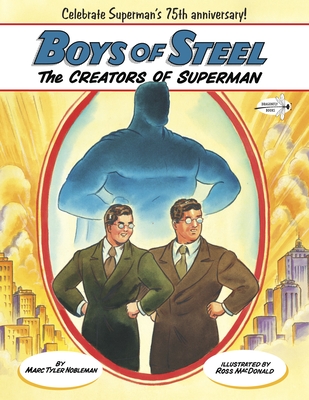 Boys of Steel: The Creators of Superman (Paperback)

Jerry Siegel and Joe Shuster, two high school misfits in Depression-era Cleveland, were more like Clark Kent--meek, mild, and myopic--than his secret identity, Superman. Both boys escaped into the worlds of science fiction and pulp magazine adventure tales. Jerry wrote his own original stories and Joe illustrated them. In 1934, the summer they graduated from high school, they created a superhero who was everything they were not. It was four more years before they convinced a publisher to take a chance on their Man of Steel in a new format--the comic book. The author includes a provocative afterword about the long struggle Jerry and Joe had with DC Comics when the boys realized they had made a mistake in selling all rights to Superman for a mere $130.

MARC TYLER NOBLEMAN grew up thinking he'd become a superhero because his last name already sounded like one. Instead he turned into a writer and cartoonist and a comic book maven. In researching Boys of Steel, he dug up details about the creators of Superman that have not been in a book before.
Starred Review, Booklist, June 1, 2008:
“[T]his robust treatment does [Shuster and Siegel’s] story justice.”
Starred Review, Kirkus Reviews, June 1, 2008:
"The battle for truth and justice is truly never-ending."
Starred Review, Publishers Weekly, June 23, 2008:
“Nobleman details this achievement with a zest amplified by MacDonald's … punchy illustrations.”