The Watsons Go to Birmingham--1963 (Paperback) 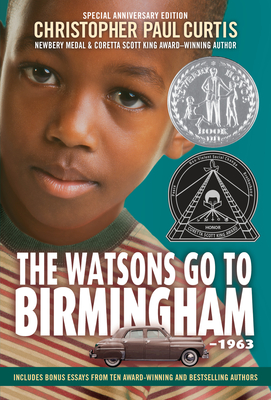 The Watsons Go to Birmingham--1963 (Paperback)


On Our Shelves Now at:
Celebrate the 25th anniversary of the Newbery and Coretta Scott King Honoree about an unforgettable family on a road-trip during one of the most important times in the civil rights movement.

When the Watson family—ten-year-old Kenny, Momma, Dad, little sister Joetta, and brother Byron—sets out on a trip south to visit Grandma in Birmingham, Alabama, they don’t realize that they’re heading toward one of the darkest moments in America’s history. The Watsons’ journey reminds us that even in the hardest times, laughter and family can help us get through anything.

“Marvelous . . . both comic and deeply moving.” —The New York Times

"One of the best novels EVER." —Jacqueline Woodson, Newbery Honor and National Book Award–winning author of Brown Girl Dreaming

Bonus Content
• New foreword and afterword from the author
• Map of the Watsons’ journey
• Original manuscript pages and letter from the Newbery committee
• Personal essays celebrating the book’s legacy by award-winning authors: Elizabeth Acevedo, Chris Crutcher, Kate DiCamillo, Varian Johnson, David Barclay Moore, Jason Reynolds, Jerry Spinelli, Vince Vawter, Rita Williams-Garcia, and Jacqueline Woodson
Christopher Paul Curtis won the Newbery Medal and the Coretta Scott King Award for his bestselling second novel, Bud, Not Buddy. His first novel, The Watsons Go to Birmingham—1963, was also singled out for many awards, and has been a bestseller in hardcover and paperback. His most recent novels for Random House include The Mighty Miss Malone, Mr. Chickee's Messy Mission, Mr. Chickee's Funny Money, and Bucking the Sarge.

Christopher Paul Curtis grew up in Flint, Michigan. After high school he began working on the assembly line at the Fisher Body Plant No. 1 while attending the Flint branch of the University of Michigan. He is now a full-time writer, and lives with his family in Windsor, Ontario.